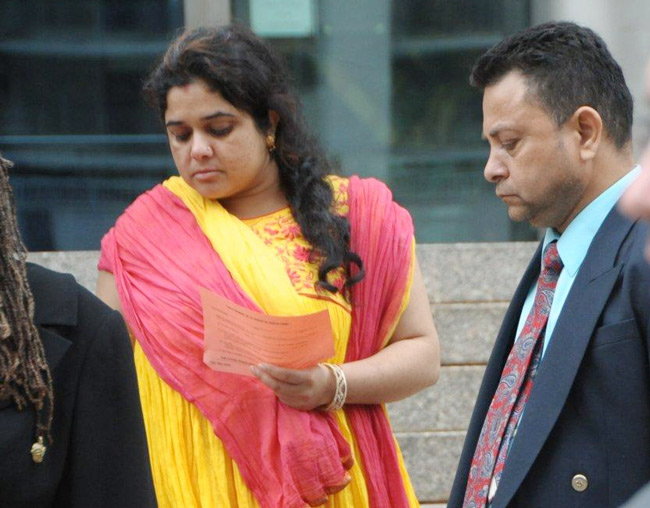 New York, July 30 (IANS) An Indian-origin woman in the US has been charged with brutally abusing her 12-year-old stepdaughter for nearly two years, said US authorities. She now faces 25 years in jail.

Sheetal Ranot, 35, was found guilty of locking her pre-teen step daughter Maya Ranot, in her bedroom without food or even water for extended periods of time, the officials said in a statement on Friday.

The preteen weighed just 58 pounds when the 5-foot-3, 160-pound Sheetal,  gashed the child’s wrist to the bone with a jagged metal broom handle, authorities said. When medical personnel arrived at the family residence, they found Maya lying in a pool of blood in the kitchen with the tendons to her left wrist cut to the bone. Maya was transported to Elmhurst Hospital where she underwent surgery for her wrist and received stitches to her knee. At the time, doctors allegedly observed several bruises, marks and scars in various stages of healing throughout Maya’s body including bruises on her right scapular area, right ear and legs.

District Attorney Brown had said then that “The criminal charges allege that this young victim was subjected to years of unspeakable physical abuse at the hands of her father and stepmother – including being locked in her bedroom by her stepmother without food or water for extended periods of time and forced to take cold showers while her father hit her about her body with his hands and even a baseball bat. Despite the bruising and scarring on her body which served as a silent testament to the violence and cruelty she purportedly endured, it is alleged that for a long time this emaciated child was fearful of disclosing the true nature of her injuries or those responsible for her suffering for fear that her younger step-siblings would be taken away by authorities and placed in foster care.

Fortunately, she found the courage to speak up.”

Ranot and her husband tortured the child for nearly two years in their Ozone Park house of horrors, Brown said.

Rajesh Ranot, the victim’s biological father, is also charged with second- and third-degree assault, first-degree unlawful imprisonment and endangering the welfare of a child, and will be tried at a later date, the statement read.