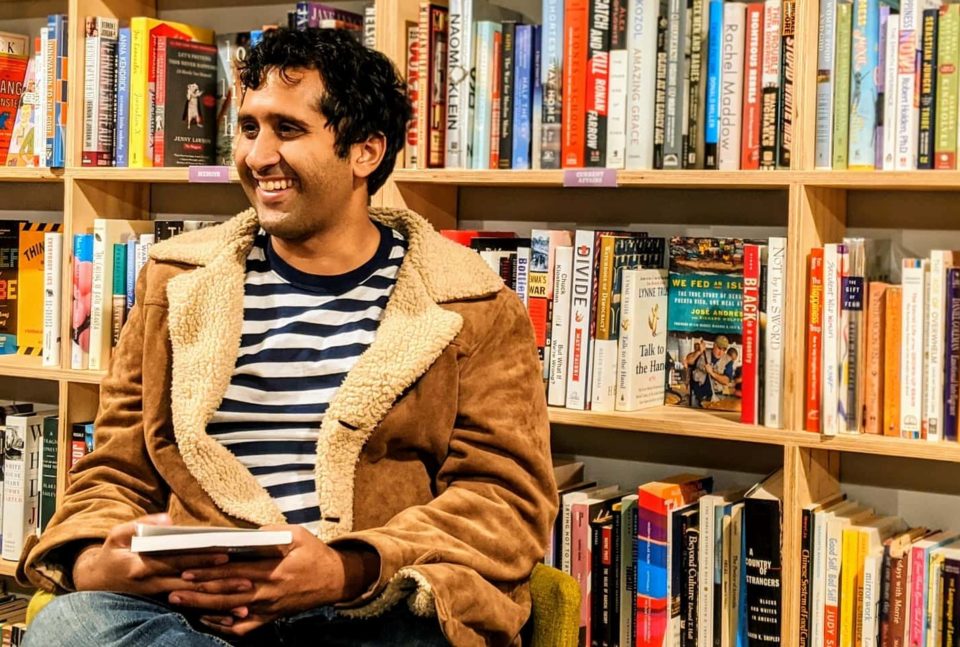 Atlanta, GA: “I like to experience the universe as one harmonious whole,” Albert Einstein famously said. In his cavernous epic of interwoven allegories, WE, of the forsaken World, Kiran Bhat amalgamates seemingly arbitrary connections across the globe into a singular precipice of humanitarian consciousness. Bhat’s strength lies in the fact that he draws his characters and locales from within the framework of everyday struggles, be it social, environmental, psychological and sometimes, even spiritual. Bhat’s characters, much inspired from his global travels, range from the tribal population to crowded metropolitan city dwellers, all of who represent different lives that inhabit this planet at every second, everywhere.

Tracing the lives and times of sixteen people spread across four distinct places on the planet, Bhat entwines several narratives and narrative styles, infusing a reflective monologue in passages that serve as connections of language and selfhood. The passages are highlighted in bold type font, lest you miss the profound poetic significance.

She blinked at me with the small wick of someone

who had felt their inner candle –the Home Maker

I was the papaya stripped of my peel,

with something wet clinging to my bones,

us stuck in these positions,

WE, of… connects four distinctive stories sprawling across different terrains of the world, connected in the context of globalism. Bhat allows the reader to imagine a real place of their choice on his magical journey across the globe, ever so careful never to actually mention an actual name, be it the parables of a man who travels to his birthplace, a tourist town, “The Lake of Sacred Salt” which is now a scene of devastating tragedy when a once sacred body of water is contaminated by industrial waste, a homeless, a one armed woman in a the dichotomous “Black City” that draws contrast between its sleek modernity and its neglected slums, on a mission to avenge men who trafficked her, birth of a chief’s second son in a remote tribe, “Tribe of the Silt,” and the struggle for succession, or a milkmaid in a “Global Village” who watches helplessly as her so called friends betray her trust, allured by the world of cellphones and the gross misuse of it. The “Tribe of the Silt,” for the reader could be the Amazon, or a remote tribe nestled in an Indian forest area, depending on their worldview.

Each of Bhat’s parables exist very much on their own, offering an insight into human nature that remains a constant, irrespective of what part of the world, or the strata of society they belong to. These primal instincts of human beings are portrayed in fine detail, be it the inequality in the tribal community, conflict of the journalist, a sense of mistrust and betrayal brimming within the milkmaid and the vengeance that burns within the one-armed homeless woman.

Bhat braids each of his supporting characters into his narrative with just as much finesse as he does his main characters, each gliding in and out in a story cycle, operating with their own narrative structure with connections sometimes linear, sometimes abstract. The sixteen ‘WE’s’ of Bhat’s world,  be it the sex columnist, the preacher, the famous singer, the or Lyrica who longs for her son, intensely immerse the reader in their forsaken worlds, gently drawing attention to the trials and tribulations they experience in each of their context and humanity as a whole.

The simplistic introductory “map”, also a characteristic Bhat seems to embrace, is hardly simple in its structure or narrative. The creative journey unfolds layers of human nature in its raw and rustic form, offering glimpses of reality that exists, tribulations each must tread, and a mirror to the soul of humanity.

Are you ready to set on this whimsical literary journey? Do grab your copy of WE of the forsaken world. You will enjoy the ride.

The book is available on Amazon. You may check https://kiranbhatweldgeist.com for details.

About the Author: Atlanta native, and polyglot author Kiran Bhat has visited132 out of the 195 countries in the world, been based out of 18, and knows 12 languages. He has authored six books so far, including one in his native language of Kannada.

Private vs. public universities: Which one is right for you?