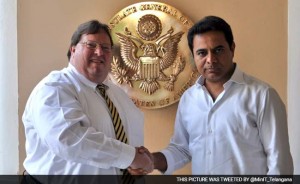 Hyderabad, Jan 5 (IANS) The US consul general in Hyderabad on Tuesday said they were taking seriously the issue related to students being sent back to India.

Terming it a “very serious issue”, Michael Mullins said the US ambassador in India Richard Verma was working on it.

“It is a big concern obviously for students, their parents, their families, and governments of Telangana and Andhra Pradesh although it’s not just two states, there are students from other states as well who are involved in this and sent back that is why it is being looked at centrally by the ambassador and ministry of external affairs,” he said.

The consul general was replying to a query on the sidelines of an event.

“We are limited in what we can say right now. We are looking very hard at this both here and in New Delhi and in Washington,” he added.

About 100 students from both the Telugu states have been sent back over the last few weeks after they landed in the US. They complained that the US authorities did not give any reason for their action but in some cases they were told that universities they selected are under scrutiny.

The incidents have led to concern among students and their families in the two states.

Meanwhile, the Telangana government on Tuesday conveyed its concern over the issue to the US consulate.

The minister later told reporters that it was not proper to send back students, who obtained visas and are trying to legitimately enter the US.

He said this was causing severe hardships and huge financial loss to students and their parents.

According to the minister, the consul general, while acknowledging that this happened in some cases, assured that they were trying to rectify it.

The minister noted that in some cases such incidents were happening because of problems with the students’ documents. Some students were using fake certificates and documents.

Tarakarama Rao, who is the son of Chief Minister K. Chandrasekhar Rao, said the government would deal firmly with those involved in making fake documents.

He suggested that the consulate check the authenticity of all documents here before issuing visas so that students don’t suffer after landing in the US.

The minister also brought to the consul general’s notice some media reports about the ill treatment meted out to some students by the US authorities.

The consul general, however, denied that any student was handcuffed.

The minister said he was also writing to External Affairs Minister Sushma Swaraj to take up the students’ issue with the US homeland security officials.

He noted that Hyderabad was the further biggest embarkation point in the world for students going to the US. The city also ranks second in the country in terms of sending employees to the US.