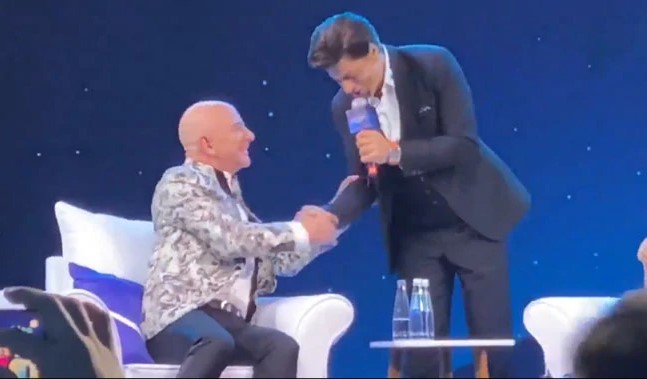 Bezos was interacting with SRK and filmmaker Zoya Akhtar, when he commented: “He (Shah Rukh) is one of the most humble people I have ever met.”

At this, the audience applauded wildly, reports news18.com. However, SRK was clearly in the mood for humorous repartee.

The world’s richest man, Bezos almost choked on the glass of water he was sipping at, trying to curb a chuckle.

The Amazon boss later shared a clip of the incident on Twitter.

“Lots of fun on stage with @iamsrk and Zoya Akhtar,” wrote @JeffBezos.

During his stopover in Mumbai, Bezos met several Bollywood celebrities.

Lots of fun on stage with @iamsrk and Zoya Akhtar. pic.twitter.com/wdZ2tEsySX