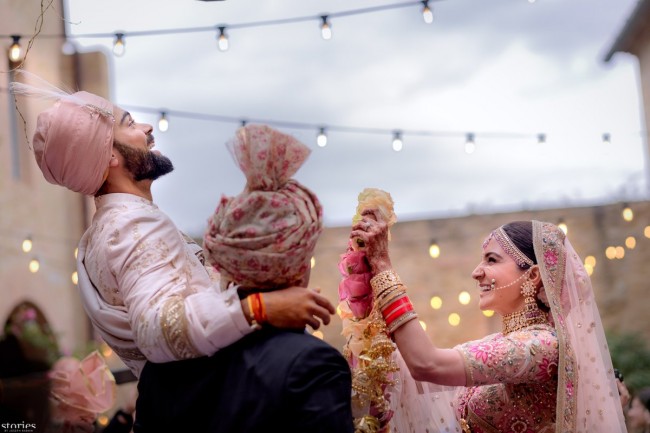 Florence (Italy), Dec 11 (IANS) Indian cricket team captain Virat Kohli and Bollywood actress Anushka Sharma sealed their relationship with a wedding here amidst close family and friends on Monday.
“Today we have promised each other to be bound in love forever. We are truly blessed to share the news with you,” Virat and Anushka posted on their social media accounts.
“This beautiful day will be made more special with the love and support of our family of fans and well-wishers. Thank you for being such an important part of our journey,” the statement read.
The happy couple shared their wedding photographs on social media with fans. In one image, they are seen laughing happily during the ‘phera’ ceremony, while in another, a smiling Anushka is seen holding the garland to place it on Virat, who is held aloft by friends. 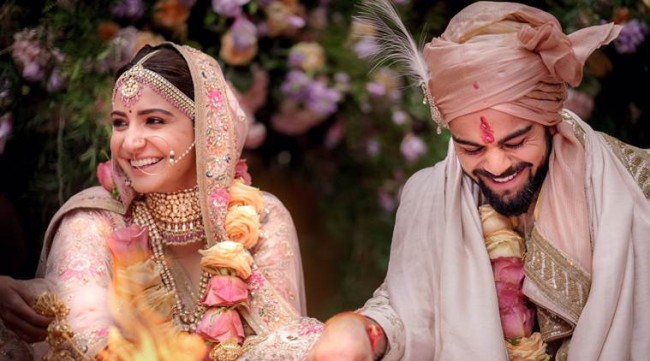 The wedding was solemnized as per Hindu rituals at 2 p.m. here, with the bride and groom looking resplendent in ensembles by celebrated couturier Sabyasachi Mukherjee.
The couple, who has been together for four years, is said to have chosen a luxury heritage resort Borgo Finocchieto, a little over 100 km away from here, for their nuptials.
Anushka and Virat, both 29, set tongues wagging about their wedding when they were seen leaving the Mumbai and Delhi airport respectively with their family members last week. All of them maintained a stoic silence, keeping the secrecy about the much-anticipated union intact.
Virat has been fairly open about how Anushka’s presence in his life has brought in positive changes in him, but the actress has preferred to keep her private life private.
The rumours about their wedding had gathered steam when Virat asked for rest during the ODI and T20Is against Sri Lanka. He will join the team for the South Africa series which starts from December 30.
But before that, the couple will be hosting a reception in New Delhi for their relatives on December 21, followed by a reception for industry friends and cricketers in Mumbai on December 26.
The couple will travel to South Africa where Virat will start prepping for the upcoming series and Anushka will spend New Year’s Eve with him, read a statement from the actress’ representative.
She will return in the first week of January to begin the next schedule of Aanand L. Rai’s film with Shah Rukh in Mumbai. She will also start prepping for “Sui Dhaaga” as the shooting for the same starts in February 2018 with Varun Dhawan.
That apart, the actress-producer will also be busy with the marketing and promotions of “Pari”, which will release on February 9.
Anushka, the daughter of an army officer, was a model before she made inroads with “Rab Ne Bana Di Jodi” opposite Shah Rukh Khan in 2008. It set the pace of a career which has seen her be a part of movies like “Band Baaja Baaraat”, “Jab Tak Hai Jaan”, “PK”, “NH10”, “Dil Dhadakne Do”, “Sultan” and “Ae Dil Hai Mushkil”. Her last release was “Jab Harry Met Sejal” earlier this year.
Even Virat’s India career started in 2008 in the senior team, after he led the U-19 team to a World Cup win. He has had a glorious run on the cricket pitch ever since.