BY SUNEETA MISHRA
Photos by Bytegraph

Atlanta, GA, April 20, 2017: Atlanta recently witnessed a unique event – an eclectic group of people dancing for the Vibha fundraiser called “Vibe 2017 – Dancing for a cause”.

Vibha is a non-profit organization, which since its inception in 1991, has raised $13 million and supported more than 250 projects in India and 10 projects in the US. With a vision to ensure that every under privileged child attains his/her right to health, education and opportunity, it has touched over 300,000 underprivileged children. It has a volunteer network of 2,200 volunteers spread across 18 action centers in cities across America and India. Vibha has several fundraising events throughout the year like the DreamMile and Vibha Cricket event that most are familiar with.

This was the first time Vibha hosted a cultural fundraising event that involved the local leaders, with an intent to create more visibility for Vibha and having the patrons form a personal connection with the cause and celebrate the joy of giving with their family and friends. The event was sponsored by Basuree, Yupp TV, Futurewave and S3 catering and supported by Maison D Puranique, Meraki Makeup, CountOnUs, Bytegraph Productions, Bhushan Karnik Photography,  BeTheYou and Prem’s Dance Studio.

Modeled loosely on the popular TV show “Dancing with the Stars”, this black-tie dinner event aimed at raising funds for underprivileged children with the active participation of Atlanta’s community leaders and local celebrities. A team of 10 dedicated Vibha volunteers worked tirelessly over the past couple of months to conceptualize, plan and organize this event. An additional 18-member event day volunteer team executed this event to perfection.

The format was simple: 11 distinguished couples, “Stars” from the Atlanta area were paired with a choreographer of their choice, to compete in a dance face-off  in front of a sold out crowd. The Stars were chosen based on nominations from the Vibha Atlanta’s volunteer team. These stars represented various professions and communities in Atlanta ranging from founders of successful companies, executives at global firms, community association leaders to trailblazers at non-profits. They were also entrusted with the task of raising funds for Vibha by influencing their friends and family to contribute for the cause. The entire experience was a culmination of over two months of intensive practice and coordination where the stars, not just rehearsed for their performances and generated funds, but they also learned about Vibha’s work through involvement in projects of  their choice. While two couples actually visited the projects and met the beneficiaries inIndiain person during this time, others used technology like Skype and FaceTime to chat and get to know the beneficiaries and project volunteers. Social media particularly Facebook was used to make the message go viral as the participants posted preparation videos and shared messages about this unique event.

Amit Malik and Alpa Amin set the dance competition rolling with a foot tapping medley of bollywood numbers that included “Aati Kya khandala” and “Balam Pichkari” with the able guidance of their choreographer Gayatri Menon of ExpressTheBeat.

The next stars of the evening were Aparna Bhattacharyya and her choreographer Maria Martynova who danced to a contemporary number called “Man Ke Manjire”. A very apt choice, the dance was an inspirational ode to women. The use of bright silk fans during the dance added an element of drama to the nuanced performance.

Priya & Sonica Sahetiya were up next and performed semi-classical bollywood numbers. The mother-daughter duo danced to “Deewani Mastani and Prem Ratan Dhan Payo” with the steps choreographed by Sonica herself. Graceful and in tandem with flowing ghagras, this was a real treat to watch.

The fifth performance of the evening to the unexpected delight of the audience was a waltz! Gracefully performed by Sulabha, dressed in a beautiful wine red evening gown, and  Abhay Paranjape to the music of Olivia Newton-John’s “Instrument of Peace”, this evoked the charm of fluid dancers in perfect sync. This piece was choreographed by Brian Dixon of Planet Ballroom.

Sudhir and Payal Agarwal were the sixth dancing stars in the lineup with a bollywood remix of “Dil Kya Kare”, “Chittiyaan Kalaiyaan” and “High Heels”. Choreographed by Udita Menon of ExpressTheBeat, the performance was interspersed with some storytelling, ending with a plea for donating to Vibha.

Chandrika Narayan came next, supported by her choreographers Meghna and Movina. They started with “Aja Nachle”, which saw Chandrika displaying some nimble footwork. The song swiftly melded into a Michael Jackson classic – “Black and White” where the dancers gave a fitting dance tribute to the King of Pop.

Neha and Nish Parikh performed the next number with a medley that included “Banno”, “Breakup Song” and “Gerua”. Their performance had a dramatic climax with both the dancers going up on a platform and her changing into huge a bellowing orange skirt providing a stunning visual for the “Gerua” song. Their dances were choreographed by Shilpa Jadwani.

Andy Leverett and Henna Bakshi’s modern number, choreographed by Amit Pawar, had oodles of funk with the couple wearing matching LED outfits that glowed in the dark. Cute and peppy, they danced to “Dil To Bachha Hai Ji”, “Mehendi Lagake Rakhna” and “Abhi To Party Shuru Hui Hai”.

Kavitha Palani and Arul Murugan’s performance was marked by his spectacular entry to the dance floor on a hover board! He swiftly stepped off the board to match Kavita’s steps to “Cham Cham Cham” and “Kala Chashma”. Quite innovative and modern, the choreography was done by Shiva Turlapati. 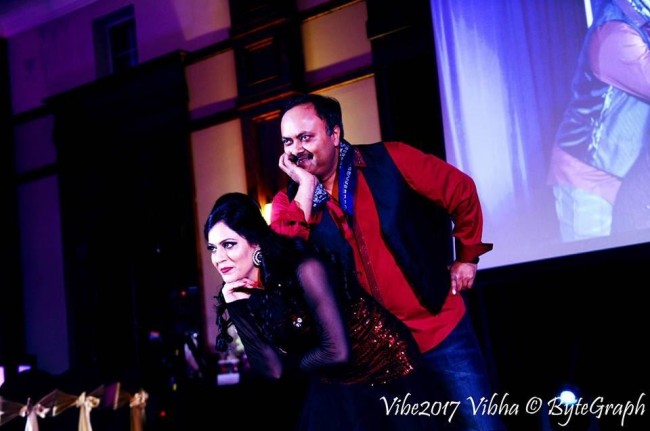 The last performers of the evening were Shaveta and Anuj Jain who wore matching red and black outfits and danced to “Kar Gayi Chul”, “Jabse Mere Dil Ko”, “Dilliwali Girlfriend” and “Badri ki Dulhaniya”. Fast paced and playful, the dances choreographed by Uma Muralidharan were a befitting finale to the wonderful evening.

After the star dances were done, the choreographers stepped in to showcase their performances and kept the rhythm going for the rest of the evening.

To decide on the winners, the audience texted their favorite performer codes and the votes were counted in real time to arrive at the award winners. Pramod and Pratima Sajja won the award for the couple raising maximum funds for the event. They also won the first place for the audience choice award. The runners up award for audience choice went to Alpa Amin and Amit Malik. Representative Brenda Lopez gave away prizes to the winners.

The evening also saw the release of the official Vibha song video called “One More Star”. Composed by Chandan Gokhale, and conceptualized by Vibha volunteers Vindali Vartak & Kannan Udayarajan, the heartwarming video features beautiful and poignant vignettes and underlines the value of education, truly capturing the essence of Vibha.

A silent auction of items donated by patrons to generate additional funds for Vibha rounded off the pleasant evening. What resonated with the audience was watching a group of enthusiastic people who did not really have any formal training,  getting out of their comfort zone and dancing for a great cause. This event alone generated close to $80,000 and will support annual education cost of educating about 3000 children in need. Hope this inspires a lot more people to sign up next year and keep the celebration going. Kudos to the organizers for a well organized, fun event that helped generate funds for a noble cause. Wishing Vibha all the best and looking forward to more such exciting fundraising events in future.

More information on Vibha can be found at www.vibha.org.

Full coverage of the event can be accessed at http://events.vibha.org/atlanta/vibe/dancingstars

Suneeta Mishra is a learning and development consultant based inAtlanta. An avid blogger, she recently co authored a cookbook called “Cooking up a storm: The Misra family way”. You can follow her blogs at diehardfoodies.blogspot.com and linoodiaries.blogspot.com.

Which foods are making Indian-Americans obese?