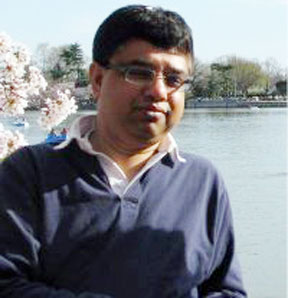 New Jersey, Nov 16 (IANS) A teenager in Old Bridge, New Jersey, has been sentenced to 15 years in prison for the beating to death an Indian American computer scientist in 2010.

Julian Daley, who was 16 at the time of the crime, was also sentenced to five years on an unrelated burglary charge, which will run concurrent to the 15-year sentence for manslaughter, according to njpressmedia.com. Daley was among five Old Bridge teens charged in connection with the beating death of Divyendu Sinha. Sinha, 49, his wife, Alka, and two sons were out for a late-night walk on June 25, 2010, near their home when they were attacked.

Sinha was punched in the head and died three days later at Robert Wood Johnson University Hospital in New Brunswick. His two sons had minor injuries, and his wife was not hurt.

Sentencing Daley Tuesday in New Brunswick, State Superior Court Judge Bradley Ferencz Ferencz said given Daley’s history, he was not convinced that he would not re-offend.

“It is important also to note that there must be a clear, concise message sent to the community that one should be free to walk in one’s community, to walk with one’s family, free from physical attack,” Ferencz said.

He said it was a tragedy for both the Sinha and Daley families. He said everything he read tells him that “the (Daley) family tried everything in their power to steer him in a different direction, unfortunately, unsuccessfully.”

Dressed in green prison garb, Daley, who read a statement, apologized to the Sinha family, his family and the judge.
“I wish I could rewind the clock and undo everything that has happened, but I can’t,” Daley said.

He said while his apology will not bring Sinha back, “I hope and pray you can find it in your heart to forgive me some day.”

Sinha’s widow said that during the 31/2 years she has been in court since her husband’s death, “Julian Daley has never said anything that can make me feel that he was remorseful.”

Last month, Ferencz sentenced Christopher Conway to seven years in prison and Cash Johnson and Christian Tinli to six months each for their roles.

Bangs are back with a bang!

US sees surge of asylum seekers from India: Report