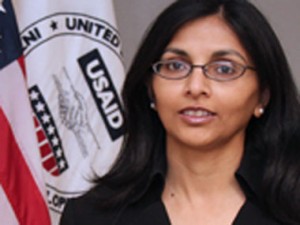 Washington, Oct 17 (IANS) The US Senate has confirmed Nisha Desai Biswal, an accomplished Indian-American administrator, as America’s new point person for South Asia making her the first person from the community to hold the top diplomatic position.

Taking over from incumbent Robert Blake as the new assistant secretary of state for South and Central Asia, she will oversee US foreign policy and relations with India, Pakistan, Bangladesh, Afghanistan, Sri Lanka, Nepal, Maldives and Bhutan.

Biswal is currently assistant administrator for Asia at the US Agency for International Development, which is headed by Rajiv Shah, the highest-ranking Indian American in the Obama administration, a position she has held since September 2010.

A graduate of the University of Virginia, Biswal began her professional career in Washington DC with the American Red Cross in the mid-1990s before she joined USAID in her first stint.

As a Hill staffer with the US House of Representatives International Relations Committee from 1999 to 2002, she worked extensively with diplomats from the region before doing another stint with NGO InterAction.

From 2005 to 2010, she was the Majority Clerk for the State Department and Foreign Operations Subcommittee on the Committee on Appropriations in the US, a crucial position for allocation of American foreign aid.

Although there have been several other Indian-Americans at the assistant secretary level, namely Bobby Jindal, Richard Varma, Karan Bhatia, Suresh Kumar among them, this is the first time an Indian-American would be heading the South Asia bureau.