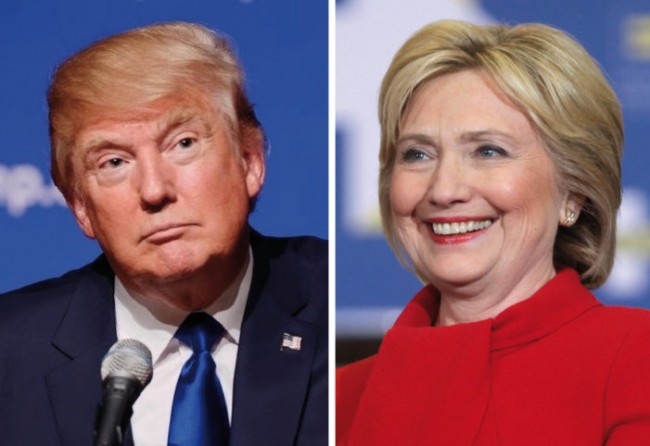 New York, Sep 27 (IANS) US presidential contenders, Democrat Hillary Clinton and Republican Donald Trump, sparred for 90 minutes at the Hofstra University auditorium in New York state in the first of their three presidential debates with pollsters giving an edge to the former first lady.

The debate covered American prosperity and security, and in each of these issues Trump tried to give the impression that everything had gone wrong with America and he was coming as a whiff of fresh air to fix thing.

Clinton, a former Secretary of State in President Barack Obama’s first administration, and a long-time senator and Washington insider, was initially defensive, but then she came out strong and forceful to score some telling hits on “facts” against Trump who often tried to change the subject when he had no specific answers.

Clinton and Trump wasted little time going for each other’s jugulars, each stampeding over the other’s talking points as their intensely anticipated first debate began, Politico, that monitors American politics, said in its initial comments.

Lester Holt of NBC, who moderated the debate on behalf of the Commission on Presidential Debates, said the first debate would centre around three broadly defined topics – “America’s Direction,” “Achieving Prosperity,” and “Securing America”. The debate was broken into six, 15-minute time segments.

Two minutes was allotted to answer a question asked by Holt, two minutes to reply and the remaining time for the nominees to debate.

Things got pretty personal between the candidates with Trump charging Clinton with lacking the stamina to be president.

But Clinton, who recently figured in some questioning media discussion over her health brought about by a bout of pneumonia that made her stumble somewhat at the ceremony in New York commemorating the victims of the September 9, 2001, terror attacks, fought back to say: “I think Donald just criticised me for preparing for this debate.”

“And yes, I did. And you know what else I prepared for? I prepared to be President. And I think that’s a good thing.”

She said, as secretary of state, she has travelled non-stop to 112 countries, indulged in negotiations with heads of government, her counterparts and others and, above all, figured in a non-stop 11 hours of questioning by a congressional panel over her e-mail controversy, and if she could do all, it should settle any questions about her stamina, she said to applause from an audience which was told not to clap or boo as per rules.

The debate saw former president Bill Clinton, and their daughter Chelsea and her husband Marc in the audience as was Trump’s entire extended family.

If Trump were to be believed, nothing had gone right with America all these years and it had been sold off by its politicians, across the political spectrum, on its “bad” trade deals and shortchanged on the security front. Trump said he is going to change things, once he became president, without getting specific on any.

He even said he had a plan to “eliminate ISIS”, which he blamed the previous Obama administration for helping to create by pulling out US troops from Iraq hurriedly and creating a vacuum, but said he would not reveal his plan as it needed to be a “secret” as otherwise it would lose its surprise effect on the intended enemy.

He was evasive about why he had not made public his finances — the first presidential candidate not to do so — saying it was still under audit, a point that was pounced upon by Clinton to say that he did not do it so far because it would come out in public that Trump didn’t always pay his taxes.

Trump repeated his old contentions that allies Japan, South Korea, Saudi Arabia needed to pay for their own security as US security umbrella to all these countries was costing America “billions of dollars” that could be used much better in rebuilding the country.

He also threatened to scrap or renegotiate some of the “bad” trade deals like the North American Free Trade Agreement (NAFTA) that came into force in 1994, or re-define the terms of military agreements like NATO, leading Clinton to say that she, from this podium, wanted to assure allies, who were worried about the direction that America under Trump might take, that America stood by them and could be counted on.