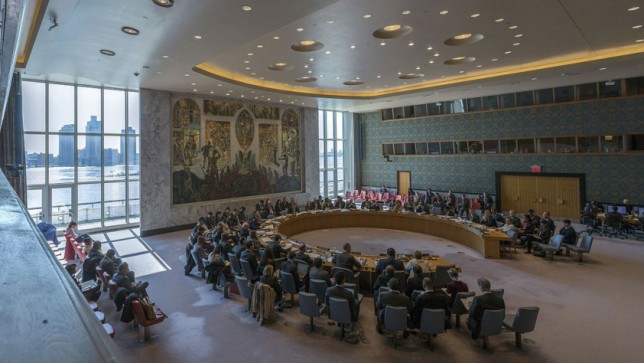 United Nations, Aug 15 (IANS) The UN Security Council (UNSC) is to hold closed-door consultations on the Kashmir developments on Friday at the request of China, a diplomat at the Security Council told IANS on Thursday.

The diplomat said that China’s request for the meeting was made in a letter and came up during the Council’s informal consultations on Wednesday.

The format of the meeting as a closed-door consultation would preclude Pakistan participating in it, the diplomat said.

As a closed-door meeting, the consultation’s proceedings would be secret, without being broadcast or accessible to reporters.

China wanted the consultations to take place on Thursday, but since the schedule was already set for the day without any meetings, it was to be taken up on Friday, the diplomat said.

The diplomat said that the office of the Security Council President Joanna Wronecka of Poland was working out the details for holding the meeting and when it was to be held.

Pakistan had asked for a meeting of the UNSC on Kashmir following India’s decision to rescind Articles 370 and 35A of its Constitution that gave Jammu and Kashmir a special status.

Except for China, all the other four permanent members of the Council have openly backed New Delhi’s position that disputes between India and Pakistan are bilateral matters, with the US even saying that the Kashmir developments are an internal matter of India.

The consultations on Wednesday were on Syria and Central Africa, but China brought up the Pakistani request made in a letter to the Council.

Other sources said that France and China differed at the meeting on how the Kashmir issue should be discussed.

While China wanted the consultation to be formally dedicated to the Kashmir issue, France wanted it to be taken up at a lower level as “other matters” in a consultation – a sort of footnote to a consultation, sources said.