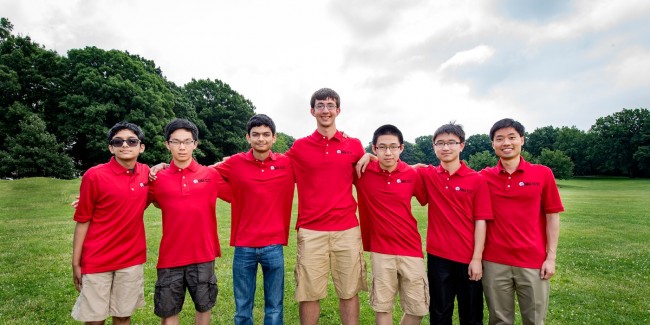 The IMO is the World Championship Mathematics Competition for High School students, where the brightest mathematics students from more than 100 countries compete. The winning U.S. team score was 214 out of a possible 252, ahead of South Korea (207) and China (204).

Members of the winning 2016 U.S. team were Ankan Bhattacharya, Ashwin Sah, Michael Kural, Allen Liu, Junyao Peng and Yuan Yao, all of whom were awarded gold medals for their individual scores. Team members Liu and Yao each earned perfect test scores. The team was accompanied by Loh and deputy coach Razvan Gelca, professor of mathematics and statistics at Texas Tech University.

“We are very excited to bring home another first-place IMO award, which serves as a recognition for the the high standard of mathematical creativity and problem-solving capabilities we have in our country,”said Po Shen Loh, lead coach for the U.S. team and associate professor of mathematics at Carnegie Mellon University.

“We have been running the U.S. Olympiad training program with a focus on the long-term development of our country’s talent, and it’s great to see that reflected in the continued team success a second year in a row,” said MAA Executive Director Michael Pearson.

IMO scores are based on the number of points scored by individual team members on six problems. On each day of the two-day competition, the teams have 4.5 hours to work on three problems. Liu and Kural are the only returning team members from last year’s winning U.S. team.