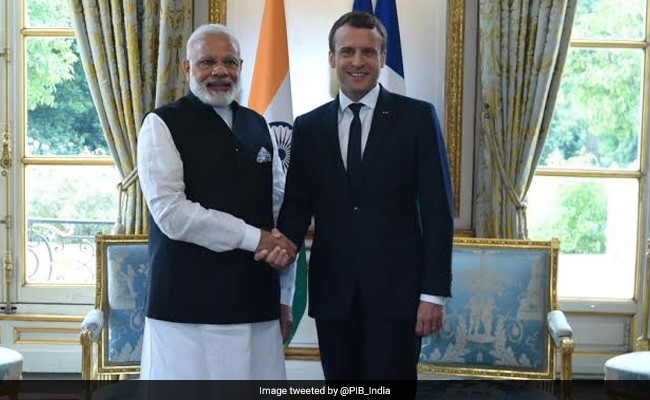 Newly-elected French President Emmanuel Macron tweeted 24 times within two hours as news, on June 1, came from across the Atlantic. US President Trump declared that he has broken away from the Paris Climate Agreement. That “breaking news” sent frenzied tremors across the globe. But Macron was “calme, prudent et reflechi” as they say in French — calm, careful and thoughtful.

French presidents are, by tradition, not known to express in public in English, but many of Macron’s tweets were in good English. Finally, later that night, thinking that his tweets were not good enough to express himself, he went on French national TV to address the Americans — in English. It was streamed alive from his office in Elysee Palace for about three minutes. He consoled Americans, which was thought to be unprecedented in French presidential history.

Then Macron went on to repeat his earlier invitation to Americans, made in video message three weeks back. He stated: “To all scientists, engineers, entrepreneurs who were disappointed by the decision of the President of the United States, I want to say that they will find in France a second homeland.”

He continued, “I call on them: Come and work here with us. To work together on concrete solutions for our climate, our environment. I can assure you, France will not give up the fight.” That was like a French welcome for elite American “climate refugees”. His voice had a tinge of sarcasm.

Reminiscent of the speeches made during World War II by American presidents to suffering nations and resistance fighters of France, Macron’s message of climate solidarity was sneaky and cheeky at the same time.

“Tonight, I wish to tell the United States, France believes in you — the world believes in you,” Macron said. He concluded his address by stating, “Make Our Planet Great Again.” President Trump responded to his tweet after midnight with humdrum monotony, “Make America Great Again!”

Meanwhile, there was no response from former President Barack Obama’s camp on charges by Trump-platoons that Obama’s ratification of Paris Climate Agreement was “unconstitutional”.

This apart, the reasons highlighted by President Trump in rejecting the tirelessly-negotiated and hard-fought international treaty that was otherwise on death bed — ready for cremation – were: Loss of American jobs, burden on American taxpayers and loss of American sovereignty. In short: Paris Climate Agreement was not an American treaty.

All these reasons clearly defy the basic tenets of international environmental negotiations. These fundamentals of collective action were captured by Prime Minister Narendra Modi in his speech to United Nations General Assembly on September 25, 2015, when he categorically stated in reference to climate change: “History shows that humanity has progressed when it has collectively risen to its obligation.” Collective rise against the impending global catastrophe like climate change explicitly puts national self-interest secondary.

Interestingly, the Trump regime is not the first American leadership to disregard international treaties since 1945. And climate agreement is not the only accord that US has turned back on. Convention on the Rights of the Child (1989), UN Convention on the Law of the Sea (1991), the UN Convention on Biological Diversity (1992), the Comprehensive [Nuclear] Test Ban Treaty (1997), Kyoto Protocol on Climate Change 1997) the Ottawa Land Mine Treaty (1997), and the International Criminal Court (1998) are just recent examples of treaties that US has simply rejected.

American hypocrisy, whether of Democrats or Republicans, has been starkly evident when some of its own national agreements, when cast in an international treaty, have been refused signatures by Washington. The list of such treaties is long and American commitment to a true global alliance has been in question.

“America First is likely to mean a further denigration of international law and process, to the further detriment of America’s national security and long-term interests,” said Jeff Sachs, Harvard educated economist, Director of Earth Institute and Special Advisor to UN Secretary General. According to him, the US is losing its democratic values, competitive edge and international stewardship.

Here lies the unprecedented opportunity for India to fill that void and take on much-needed leadership in its true sense. Many feel that China has already begun its quest to seal the gap, but its perceived long-term interests appear to converge and mould towards to the same American syndrome of “Country First”.

India stands apart with no territorial claims to expand its national interest. It is on the right track to develop and implement internationally-inclusive policies to tackle climate change. The New York Times recently concluded in its editorial comments that India, the third-largest emitter of Green House Gases , is showing “astonishing” progress in clean energy — something “worth celebrating”.

Now is the time to seize the opportunity to seal the abyss created by Trump. The Macron-Modi summit in France is opportunity to demonstrate “Planet First”. Both countries, two years back, launched the International Solar Alliance consisting of those countries that get sun-light on a majority of the days in the year. Both countries have balanced faith in useful deployment of nuclear energy. Both countries are ambitiously and ardently committed to the Paris Climate Agreement, even though the binding commitments therein are yet to be negotiated.

The Modi-Macron summit could declare that “There is no Plan B for the Paris Climate Agreement, which cannot be renegotiated, because there is no Planet B for the Earth’s citizens”.

We can expect showers of tweets from both Modi and Macron in the coming days. Hope that would help break the twitter silence of former President Obama at least, if not mind-changing tweets from the White House.

Are you on Twitter, NBC journalist Megyn Kelly asks Modi