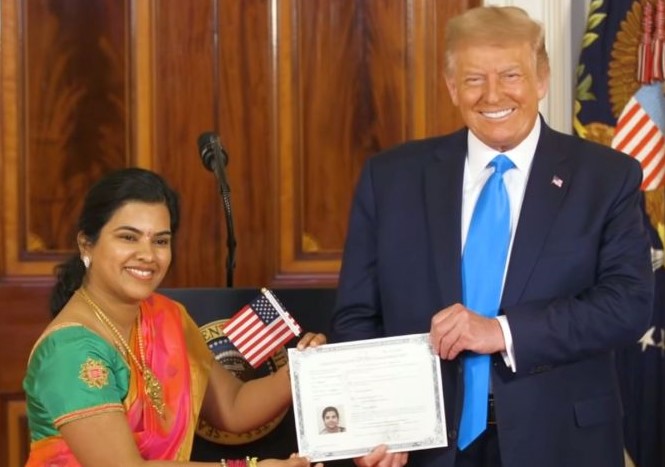 New York, Aug 26 (IANS) In a show of his support for legal immigration, US President Donald Trump dramatically welcomed an Indian software developer to “the great American family of citizens” in a White House ceremony during the Republican National Convention.

He introduced Sundari Narayanan “a talented software developer” who is a “phenomenal success” after she was sworn-in as a citizen on Tuesday.

Trump said that Narayanan had been in the US for 13 years and she and her husband have “two beautiful, wonderful children”.

Turning to her, he asked, “They are the apple of your life, right?” She nodded, “Yes.”

Clad in a bright pink sari with bright gold border, she added a dash of color to the ceremony in which Acting Homeland Security Secretary Chad Wolf administered the oath of office to her and to four others, including a hijab-wearing veterinarian from Sudan. The others were from Bolivia, Lebanon and Ghana.

They showed the changing face of America, a multicultural amalgam with non-White immigrants of different religions from around the world being the majority of immigrants.

Criticized by Democrats and immigration activists who conflate legal and illegal immigrants and cite Trumps opposition to illegal migration to assert that he is anti-immigrant, the president was using the ceremony to emphasize the difference and show his support for legal immigration.

“You followed the rules, you obeyed the laws, you learned your history, embraced our values and proved yourselves to be men and women of the highest integrity,” he said underlining their coming to the US legally and following the rules for getting citizenship.

He said that they followed the laws although it was not easy and they went through a lot to get the citizenship, the “priceless possession in the world”.

Later in the convention session, another immigrant took the stage to praise Trump and ask for to re-elect him.

That was Trump’s wife Melania, who immigrated from Slovenia.

She recalled that she had studied for the citizenship test and became a citizen through “hard work and determination”.

Trump has taken a hardline on illegal immigraton, building a wall on the southern border to stop migrants and deporting illegal immigrants, especially those with criminal backgrounds. He has also temporarily stopped the granting of green cards – or immigrant visas – and H1-B professional work visas, most of which goes to India.

But he has also proposed a reform of the immigration to make it merit-based and to break the long waits for it, and changing the way the H1-B visas are granted.

During the presidential election campaign, Trump and his supporters have made illegal immigration a key issue as they had also in 2016 and accused Democratic Party candidate Joe Biden of advocating a policy of open borders.