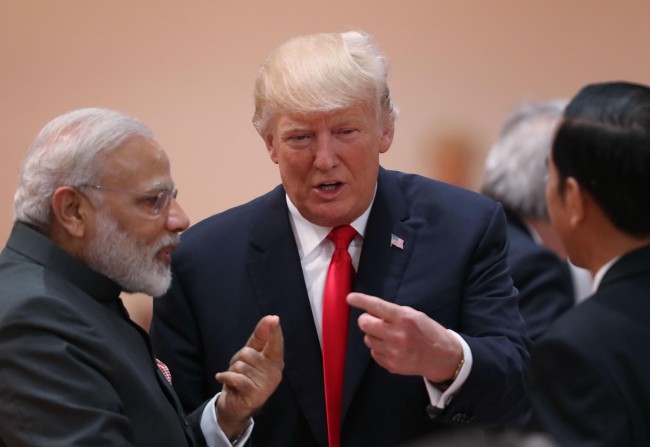 Washington, Feb 27 (IANS) US President Donald Trump, upset over the issue of high import duty on Harley-Davidson motorcycles in India, has said that Washington was “getting nothing” despite India’s announcement of slashing customs duty on imported motorcycles to 50 per cent.

He also imitated Indian Prime Minister Narendra Modi, but this time without the Indian accent.

Trump described Modi as a “fantastic and a beautiful man” while talking about his recent conversation with him in which India informed the US about reduced tariffs on imported motorcycles, but Trump said that US was “getting nothing”.

“When they (Harley Davidson) send a motorcycle to India, as an example, they have to pay 100 per cent tax, 100 per cent,” Trump said in his remarks to a gathering of governors of all the states at the White House on Monday.

“Now, the (Indian) Prime Minister, who I think is a fantastic man, called me the other day and said we are lowering it to 50 per cent. I said okay, but so far we’re getting nothing. So we get nothing. He gets 50 (per cent), and they think they’re doing us a favour. That’s not a favour,” he said.

Trump imitated Modi by folding his hands and taking in a soft and serious tone.

He said: “I wasn’t sure, he said it so beautifully. He’s a beautiful man. And he said, ‘I just want to inform you that we have reduced it to 75, but we have further reduced it to 50′. And I said, huh. What do I say? Am I supposed to be thrilled? And that’s not good for you people, especially as governors. It’s just not right. And we have many deals like that,” the US President said.

He said the US gets “zero” when it buys an Indian motorcycle.

“It’s a great company. When I spoke with your chairman or the president of Harley, they weren’t even asking for it because they’ve been ripped off with a trade so long that they were surprised that I brought it up. I’m the one that’s pushing it more than they are, but it’s unfair. And India sells us a lot of motorbikes,” Trump said.