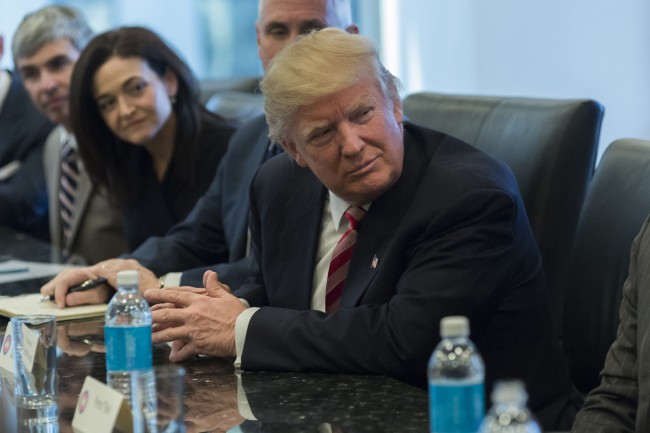 New York, Dec 15 (IANS) Pushing his America First agenda, President-elect Donald Trump met with Microsoft CEO Satya Nadella and 12 other technology titans on Wednesday in a bid to heal rifts and get them on board with his program of creating more jobs and increasing investments in the US.

Trump, who had slammed the technology sector during his campaign for exporting jobs and manufacturing overseas, hailed them as an “amazing group of people” at the start of the meeting in Trump Tower and promised them, “I am here to help you folks do well.”

Jeff Bezos, the CEO of Amazon and also the owner of The Washington Post, which continues its editorial campaign against Trump, set the conciliatory tone from the other side, saying, “I’m super excited about the possibility that this could be the innovations administration.”

A summary of the meeting released by the Trump transition team listed first among items discussed, “Creating more jobs for American workers.” This could impact Indian tech and business process sectors that rely heavily on outsourcing.

Last week, Trump said that he would not allow foreign workers on temporary H-1B visas for technology professionals to displace American workers.

Access to visas for hi-tech workers, which worried technology leaders, did not figure in the summary.

Among other items discussed were eliminating barriers preventing American companies from doing business in other countries and America’s competitive trade dynamic and market access with China.

At the beginning of the meeting he told the technology leaders, “We’re gonna do fair trade deals. We’re going to make it a lot easier for you to trade across borders …”

Nadella, who was accompanied by Microsoft President Brad Smith, refused to speak to reporters as he entered and left the Trump Tower.

While people in the technology sector criticised Trump during the campaign mostly because of their perception of his social and immigration policies, Nadella was silent in public.

After the election, Nadella congratulated Trump in a post on LinkedIn. But in an implied criticism of the Trump campaign’s perceived rhetoric, he also wrote, “Our commitment to our mission and values are steadfast, and in particular fostering a diverse and inclusive culture.”

Nadella seemed ill at ease during the start of the meeting, which was open to the media.

When the participants around the conference table introduced themselves, Nadella, who was seated at a corner away from Trump, said curtly, “Satya Nadella, CEO of Microsoft.”

When it was Smith’s turn, he tried to make up for Nadella by saying, “And like Satya, pleased to be here.”

Google CEO Sundar Pichai was not invited to the meeting as CEO Larry Page and President Sergei Brin of Google’s holding company, Alphabet, were there.

Facebook’s Mark Zuckerberg wasn’t there either and Sheryl Sandberg, the COO represented the company.

Twitter wasn’t invited to the meeting because despite its outsize influence in politics, financially it is a puny company with a market capitalisation of only $37.5 million.

Trump made it a point of emphasising that the stocks markets have voted him good for business, regardless of the tech sector’s reservations.

He referred to the recent spike in the stock markets called the “Trump bounce,” and teasingly said, “Right now everybody in this room has to like me at least a little bit.”

The NASDAQ market where many of the technology stocks are listed is up 4.6 per cent since the election.

“We’re going to try and have that bounce continue and perhaps even more importantly we want you to keep going with the incredible innovation,” he added.

He promised to cut taxes and pave the way for tech companies to bring in and invest the large hoard of cash they hold overseas because of tax concerns.