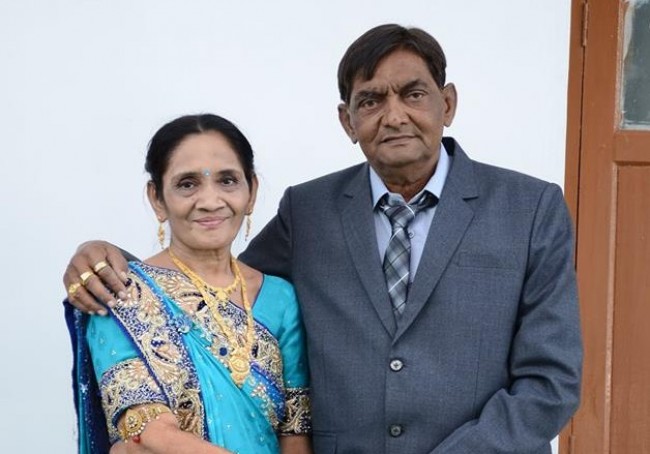 Shardaben Patel with her husband Indravadan.

Atlanta, GA, June 8, 2018: The happy anticipation of her parents’ visit for her baby shower turned into tragedy for Dhara Patel of Raleigh, North Carolina when her mother, Shardaben Patel, 63, collapsed just prior to boarding her Jet Airways flight to Washington DC from Ahmedabad International Airport on the early morning of June 2, 2018.

After Shardaben collapsed at the gate bridge, her husband Indravadan Patel, a retired government employee, asked for medical help. “It took almost 20 minutes for the airport medical staff to come and attend to an emergency case,” says Sheikh. Despite arriving late, the doctors gave no medical support. All they did was check her pulse, determine it is too weak, and ask for her to be shifted to a hospital. No CPR or any other life-saving procedure was performed.

The airport authority then called the 108-ambulance service, which arrived after almost 20 minutes.

“There was not even an ambulance present at the international airport. This is unheard of,” says Sheikh.

Once in the ambulance, the driver did not know the directions to Apollo Hospital, which was only 2.2 kilometers away. The oxygen cylinder in the ambulance was not working.

“When the family asked the ambulance staff for support, no help was given. So, for 45 minutes, until Shardaben Patel made it to the emergency ward of Apollo hospital, she received no medical aid at all,” alleges Sheikh. “It’s devastating that someone lost their life just because nobody was ready to do their job. By the time Dr. Chirag of Apollo Hospital attended to Shardaben, she had passed away. If she had received medical support at the airport, perhaps she’d be alive today.”

“Moreover, the couple’s children older daughter and her family who had come to drop them off were not even allowed to get inside the airport to see Shardaben after she collapsed at the gate,” Asia adds.

The airport staff and security didn’t let Shardaben’s husband ride the ambulance to the hospital either. “They made him stay back at the airport to finish the formality of collecting bags and cancelling the air tickets. He was not even allowed to be with her in the last minutes of her life. Instead of supporting the family, officials and authorities at Ahmedabad International Airport were extremely rude and unsupportive,” says Sheikh, who has been trying to bring the incident to the notice of the chief minister of Gujarat and PM Modi’s office so that no life is lost due to lack of emergency medical facilities at the airport.