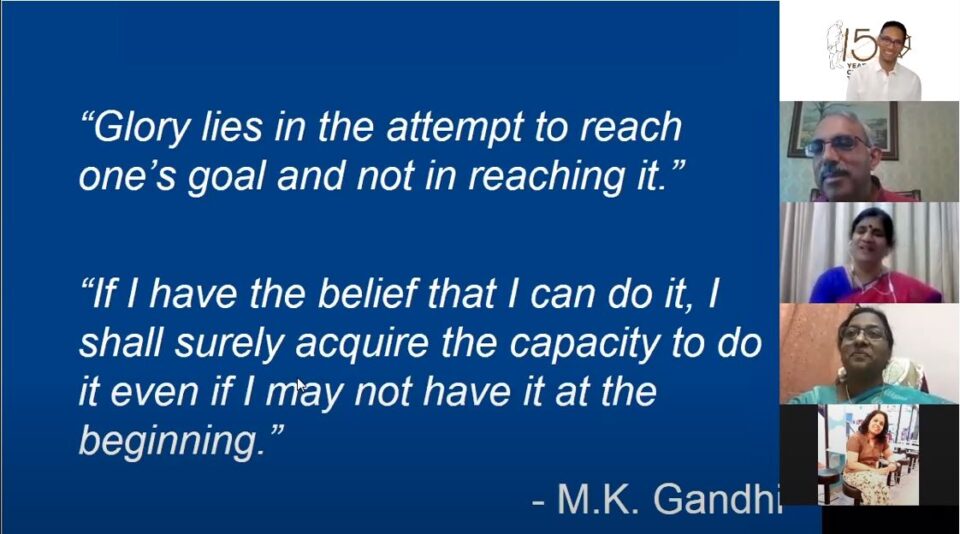 Atlanta, GA, September 13, 2020: “Generations to come will scarce believe that such a one as this ever in flesh and blood walked upon this earth,” Albert Einstein had said about the Mahatma. Atlanta’s Dr. Venkat Narayan, Ruth and O.C. Hubert Professor of Global Health Professor of Epidemiology & Medicine, Emory University, opened his address with this quote at the 150 Years of Celebrating the Mahatma’ International Webinar, themed Creating a Culture of Innovation and Critical Thinking: Lessons from Gandhi, organized by the Avinashilingam University, India and the University of Reading, UK, held on August 29, 2020.

“The very fact that Einstein should admire Gandhi with such wonderful words should make us think that in many ways he was approaching science from a very humanistic perspective and Gandhi’s humanism appealed even to science, “ said Dr. Narayan, adding that the commonality between them was their ability to think innovatively in which their thinking and their approaches made an impact on humanity.” I think this is where the connection between science and humanity, between inquiry and empathy becomes so evident to understand.”

Based on Eric Erickson’s book and his own analysis of the psychology of Gandhi, Dr. Narayan enumerated ten qualities he believes “exemplifies” the Mahatma. The list included Gandhi’s distinctive nature of truth-seeking, empathy and curiosity, imagination and intuition, willingness to take on the “impossible“ (risk-taking), incurable optimism and resilience (positive thinking), healthy ego – confidence and self- belief, continuous learning, self-reflection (humility) , clear, crisp, concise, and motivating communication, large and universal vision, and leadership.

Dr. Narayan, rooted in science himself, identified Gandhi through his scientific lens, zooming in on the qualities that set him apart and above the rest. “Invention”, Dr. Narayan said is the creation of the idea or method itself, but “Innovation,” he said refers to the use of a new idea or method. Gandhi, he noted, was a “real genius” in taking a creative idea and presenting it to the masses. Citing the Salt March, or Salt Satyagraha led by Gandhi in between March and April of 1930, Dr. Narayan noted that Gandhi had successfully identified the pulse of the nation that resonated against the taxation of salt, a basic ingredient that binds everyone, and was felt oppressive by one and all. “He somehow invents his entire idea of a march that would last 22 days and would unite the country in a very big way. He was very symbolic about the purpose of salt. The momentum that he created brought together millions of people from across the country as a grassroots movement.”

The qualities required for “Innovation”, Dr. Narayan listed include individual characteristics, institutional culture connecting ideas, people, and resources, inter-disciplinary culture (trust & partners), breaking out of comfort zone, and special type of leadership, all of which, he noted were qualities Gandhi exemplified. “We need a culture that rewards risk and we also need a culture that creates that special type of leadership that is so important for innovation and creativity.”

“We are born geniuses but there is something about social norms education systems, it begins to inhibit people as they grow older,” said Dr. Narayan, adding that a unique strength of Gandhi was that he retained the child in him all along. Highlighting Gandhi’s emphasis on starting with the children to bring about peace in the world, Dr. Narayan said, “We have to make our children fearless about losing, self-confident at the same time make them acquire a sense of humility.”

Building upon Gandhi’s quote to “Be the change you want to see in this world,” Dr. Narayan said Gandhi constantly tried to change himself before changing others.

“It took 264 years from the time of a creative idea citrus juice or lemon juice being a mandated diet for sailors on long voyages,” noted Dr. Narayan, tracing the history of explorations and the long years it took for explorers to mandate citrus/vitamin C that actually kept sailors alive, since the discovery of the fact. “It takes years to do what do we know about and Gandhi really understood it. So, whenever he had a great idea, he experimented with it and then he brought in some early adopters and then he let the idea spread.” The execution of the salt march was orchestrated and strategized by this phenomenon,” noted Dr. Narayan.

Explaining the concepts of Zero Sum and Non-Zero Sum, Dr. Narayan said Gandhi adopted the Non-Zero-Sum thinking, striving to create a culture where there is something positive for everybody to gain versus the Zero Sum, which believes that someone’s win automatically implies the loss of the other. An example he said was Gandhi’s belief that India had come a long way with the British and when they leave India must part with them as friends, so both parties can win.

Gandhi, Dr. Narayan noted, exemplified the adaptive leadership style of identifying the adaptive challenges. “He would frame the questions, provide some examples and stories and let others think about some solutions.” He added that Gandhi showed the ability to constantly criticize himself, his ways and always queried about how he was doing things how he can do things better. His queries ranged from trying non-vegetarian food, his childhood, his relationship with his parents, with his wife, among others.

Dr. Narayan also stressed upon the importance of the role of a mentor which is to create a positive environment where potential and motivation are released and options are discussed, just like Gandhi had embraced several mentors such as Henry Thoreau, Leo Tolstoy, Jesus of Nazareth, Krishna (Bhagavat Gita), Rama (Ramayan) and Gopal Krishna Gokhale.

Emphasizing the importance of enjoying the journey and to develop the attitude of believing each person’s work is important, Dr. Narayan concluded with Gandhi’s quote, ““If I have the belief that I can do it, I shall surely acquire the capacity to do it even if I may not have it at the beginning.” Universal and timeless words to live by.