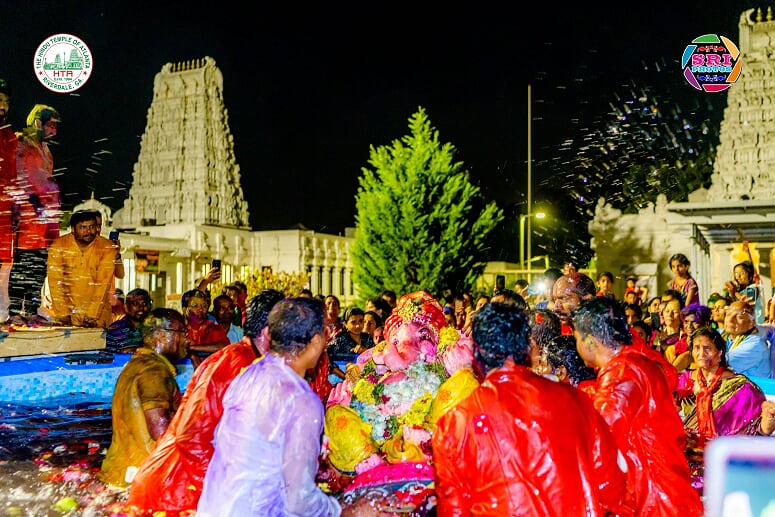 Atlanta, GA, October 10, 2019: The Hindu Temple of Atlanta in Riverdale, Georgia, (HTA) celebrated a spectacular and joyous annual Ganesh Utsav celebration from September 2nd to September 7th, 2019 which attracted thousands of devotees and visitors from all over Atlanta and South East. The celebrations were graced on the last day by the presence of Indian Consul General Dr. Swati Kulkarni.

Dr. Kulkarni addressed the huge gathering under the canopy, where she lauded the temple for organizing the Ganesha festival and bringing the community together for the celebrations.

The HTA has been hosting spectacular and well attended Ganesh Utsavs for the past seven years. The Ganesh Utsav team led by Ravi Chander decided on an eco-friendly setting for this year. The décor was planned with rainforest theme. A majestic eco-friendly and imposing clay idol of Ganapathi specially made in Hyderabad was installed in the specially built canopy in the forecourt of the Shiva temple. A wooden stage backdrop constructed by a team of volunteers, under the canopy was an ideal setting for the dazzling idol of Lord Ganesh, resplendent with rich adornments, artistic décor, and fresh flower garlands. Adjacent to Lord Ganesha mandap, Anand Bukkaraysamudram and Hanu Krothapalli along with volunteers designed a captivating, artistic display depicting Lord Shiva, greenery, animals, and gentle waterfalls for continous abhisheka of Lord Shiva.

Throughout the Utsav, the elaborate rituals, archanas and chanting of shlokas and Ganesha mantras were meticulously done by Temple priests. Devotees also enthusiastically joined in chanting Ganesha bhajans.

The Make your Clay Ganesha has been a signature event of the HTA. The eco-friendly clay Ganesha making workshop started with a prayer by Hindu Temple’s priests Sri Srinivas Sharma ji, Sri Pavankumar ji and all priests, who chanted Vedic Ganesha shlokas. Radhika ji & Nanda ji with over 50 volunteers assisted kids and adults all day to make Ganesha sculptures made of clay, guided the parents, grandparents visiting from India to make the idols.  Festive music was provided by nadaswaram and drums. Children were taught how to do Ganesh Puja and homam. Later, they took their clay-Ganeshas home

Children had also lot of fun with face-painting and mehndi and cotton candy. This merits emulation by other Temples as it helps young generation to learn the rituals, and spiritual significance of homams, and imbibe rich Indian culture.

The kitchen manned by Committee Chair Dr. Tulasi Vanapalli and volunteers was ready as always with mouthwatering prasad serving thousands of devotees. HTA provided laddu and vada for naivedyam, and parents brought Ganesha’s favorite food, modakam. The grand pooja concluded with Mangala Aarathi and blessings to the children. The HTA President, Sheela and Executive Committee thanked and congratulated all the participants.

On Saturday, a spectacular Visarjan mela provided non-stop entertainment from 10-00 a.m. to 9.00 p.m. The audience were treated to classical; contemporary, folk and fusion, dances, dance-dramas and devotional songs in Hindi and Carnatic. The riveting Cultural program coordinated and organized by Vaisheshi Jalajam and Jyothi  Chintalapudi, HTA Cultural Chair. The event was emceed by energetic, enthusiastic and ever popular emcees Vikas Goyal, Janardhan Pannela and Anshu Sharma.

The enthralling entertainment included Kuchipudi dances by talented students of Atlanta Dance and music Academy’s Gurus Jyothi Chintalapudi; Sridevi Dadithota; Sridevi Ranjith; Pushyami Lanka Gottipati,Varsha Krupananda;Latha Sriram; Neelima Gaddamanugu, Aparna Turaga, among others. Gayathri Subramaniam’s students regaled the devotees with their Hanuman Chalisa rendition. Diya Ghosh performed a scintillating dance. Leera Rawal, a student of renowned Birju Maharaj did a stunning Kathak dance. And a graceful Odissi dance in fetching costumes by students of Bhikipta Panda added extra flavor to the entertainment. Akhil of Sree Dutta Raga Dance Academy wowed the audience with his electric moves.  Well trained students of Kala Vasudevan, a trained Carnatic classical and light music singing also impressed with their singing. Rendition of Carnatic and Hindi classicals on violin and piano added to the variety of the cultural segment. Atlanta‘s Dance and Song Gurus Viji Murali; Swathi Kari and Deepa Sriram were also applauded for their singing prowess. The audience was treated to a pulsating authentic ancient drum-beat from Tamil Nadu by Mazhangu Parai team which had come all the way from Ohio to perform at the Festival. And as in previous year, street dancing with sword dance, teen maar, dand pradarshan and dancing to drums and dhols added vibrancy to the festival just before the visarajan ceremony added to the festive fervor. Kids also enjoyed matkabreaking or Handi competition. Sri Pavankumar ji performed many poojas and bhajans.

About 300 kids participated in the Arts Competition held in the Shiva Temple. Prizes were awarded to the winners of the competition, which was in three segments: Coloring, drawing and Canvas.

This year, the judge for the exciting Laddu auction was Dr. Kulkarni. Laddu auctions raised over $10,000 from generous donors, for the Temple .

Finally it was time to bid farewell to much-loved Lord Ganesh. Enthusiastic young devotees in kurtas and saffron headbands, carrying saffron flags came out of the canopy, dancing and shouting “Ganapati Bappa Morya” to the pulsating beat of dhols as Lord Ganeshji’s idol was placed in a truck, and slowly carried in a procession. A helicopter showered Ganesh ji with flower petals! Magical fireworks added extra sparkle! Two girls performed a befitting scintillating devotional dance amidst thunderous applause. Ganesh Visarjan ceremony was performed in a rubber pool on the Temple plot with joyous shouts and wishes (agale saal jaldi aa’) for his quick return the following year. As they say, “with the immersion ceremony, the Form (physical) returned to the Formless (spiritual).” The Ganapati idol became one with the water.

The HTA President Sheela Lingam effusively commented,” On behalf of the Executive Committee and the Board of Trustees, I would like to congratulate our Ganesh Program coordinator Ravi Chander and his team for a very successful event.  I would also like to thank our temple staff, priests, managers, cooks, security, volunteers and EC members.

My special thanks to Atlanta based premier photo and video company Sri Photos, who captured captivating photos and videos of the entire event.

Visitors had the smooth parking experience thanks to Ganesh utsav volunteers Madhav Kasam and team.

Without Vaisheshi & Rajender Janumpally, Anand & Sneha Bukka, Hanu Krothapalli, Deepa, Sunil Gotoor, Mahesh Koppu, Naveen Bathini, Meher Saride, Niranjan, Samir Shah and their commitment, it would have been impossible to accomplish something of this magnitude,” she said.