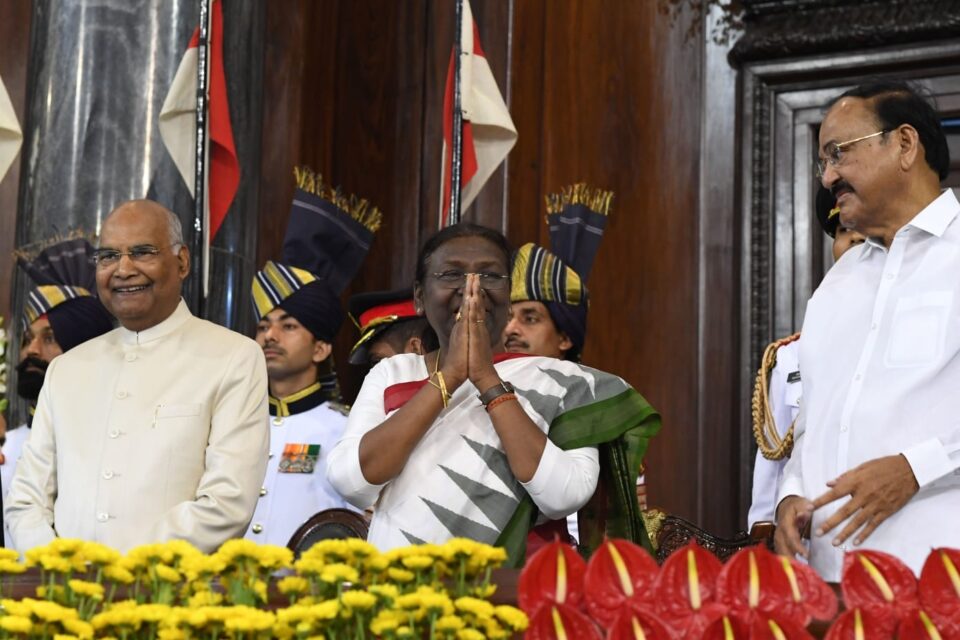 New Delhi, July 25 (IANS) India’s President Droupadi Murmu on Monday said that it is a matter of great satisfaction that those who have been deprived for centuries and those who have been denied the benefits of development, poor, downtrodden, backwards and tribals are seeing their reflection in her.

In her address after taking oath as the 15th president of India, Murmu said that she started her journey of life from a small tribal village in Odisha in the eastern part of the country. From the background that she came from, it was like a dream for her to get elementary education, she said.

“Despite many obstacles, my determination remained strong and I became the first daughter of my village to go to college. I belong to the tribal society. I have got the opportunity to rise from serving as a ward councillor to becoming the President of India. This is the greatness of India, the mother of democracy,” she said.

She noted that it is a tribute to the power of Indian democracy that a daughter born in a poor house in a remote tribal area can reach the highest constitutional position in the country.

Murmu said that attaining the post of President was not her personal achievement, it was the achievement of every poor person in India. “My election is a proof of the fact that the poor in India can have dreams and fulfil them too. And it is a matter of great satisfaction for me that those who have been deprived for centuries and those who have been denied the benefits of development, those poor, downtrodden, backwards and tribals are seeing their reflection in me,” she said.

President Murmu mentioned that this election was a blessing to the poor of the country and it reflected the dreams and potential of crores of women and daughters of the country. “This election of mine also shows the courage of today’s youth of India who are ready to walk on new paths and shun the beaten tracks. Today I feel proud to lead such a progressive India. Today, I assure all fellow citizens, especially youth of India and the women of India that their interests will be paramount for me while working in this position,” the President said.

She wished the armed forces and citizens in advance on Kargil Vijay Diwas on Tuesday.

She further noted that the country’s freedom struggle had prepared the roadmap for India’s new journey as a nation. “Our freedom struggle was a continuous stream of those struggles and sacrifices which had nurtured so many ideals and possibilities for independent India. This Amrit kaal, which commences with the 75th year of our Independence, is a period of new resolutions for India. Today I see my country inspired and ready to welcome this new era with new thinking. Today India is adding a new chapter of development in every field,” she said.

Talking about Covid pandemic, President Murmur said, “The kind of capability that India has shown in combating the global crisis of Corona pandemic has enhanced India’s credibility all over the world. Just a few days ago, India set a record of administering 200 crore doses of corona vaccine. India not only took care of itself in these difficult situations but also helped the world.

“Pointing towards G-20 country hosting,” she said, “In the coming months, India is also going to host the G-20 Group under its chairmanship. In this grouping, 20 big countries of the world will brainstorm on global issues under the chairmanship of India. I am sure that the conclusions and policies that will emerge from this brainstorming in India will determine the direction of the coming decades.”

She stated that in the past few years, a new energy has been infused in the country due to the decisions taken and policies formulated for women empowerment.

“I want all our sisters and daughters to be empowered more and more so that they continue to increase their contribution in every field of nation building,” she added.