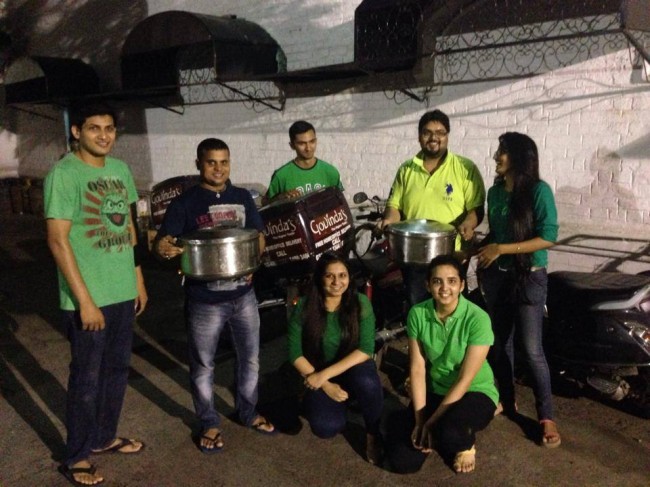 New Delhi, Oct 15 (IANS) Every Sunday, at around 8.30 p.m., a group of volunteers in green t-shirts heads out in different directions with packed food like vada pav, khichdi and parathas to serve homeless people sleeping under the open skies in the capital.

This is not a government initiative, but a collective effort of two friends who have collaborated with different restaurants and eateries in Delhi, Mumbai, Hyderabad, Kolkata and Bangalore to “serve the poor and destitute” through their Robin Hood Army, a four-month-old initiative in these respective cities.

Even though, as of now, they are doing this only once a week, they have plans to make it a daily affair in the near future.

What is noteworthy here is that they don’t take “waste” food but “leftovers” to feed the needy. Some of the eateries have even decided to prepare fresh food for such people.

“When we started, we were just six people in the team. But from the very beginning we were clear that we won’t be serving these people waste food. We requested the eateries to give us leftovers,” Anand Sinha, 27, one of those behind the initiative, told IANS.

“Some of the eateries were so excited with this concept that they chose to prepare fresh meals for us,” he added.

The idea is modelled after a similar organisation, “Re-food” in Portugal, which helps to end both hunger and food waste in the country.

It was Sinha’s partner Neel Ghose’s volunteering stint at this organisation that made them decide to replicate the model.

“We used to do this earlier but on a much smaller scale,” Sinha said, adding that Ghosh and he have been friends for the past five years.

The two in the past had distributed food among destitutes.

To plan the entire operation, they started from Delhi.They first drove around the city to identify areas of operation and initially zeroed in on flyovers in the Ring Road area, the AIIMS Metro station south Delhi and the Nizamuddin area, among others.

“Then we got in touch with a few restaurant owners, spent time with them to make them understand how their role would give something back to society,” said Sinha, who is the founder of pressplaytabs, which targets the travel and entertainment space.

After getting the eateries on board, they decided to make a Facebook page to post pictures and share their vision – and also give a credible face to their initiative.

The idea worked and now they have around 40 volunteers from different walks of life who accompany them in collecting and distributing food packages.

After receiving overwhelming response from Delhi, they spread their campaign to the other cities. In total they have around 120 volunteers in the five cities.

This collective effort has enabled them to feed around 1,600 homeless every Sunday in the five cities, but Sinha revealed they want to make it an everyday affair because “one Sunday is just not enough”.

“We all are working people so it becomes very difficult to do this activity every day. But with the kind of support and encouragement people have shown through our

Facebook page, we would like to organise a bit more and do it on a daily basis,” he said.

Their name is a twist on the English who, folklore has it, robbed the rich and distributed the booty among the poor. Sinha said the initiative is an attempt to show “how individuals can make a difference in society if they want to.”

While people of his age spend time in partying over the weekend, Sinha admits he might be “missing out on the fun”, but in the same vein feels that his work provides him and his partner with equal happiness and greater satisfaction.

Jagjit Singh Kandhari, chief operating officer of Kebab Xpress, said they want to send across a social message among the corporates to do their bit for a social cause that might make a bit of difference in the lives of others.

“Every individual should participate or volunteer in initiatives like these. If our endeavour can feed an empty stomach, we are happy to contribute more,” Kandhari told IANS.

Worried about Travel Medical Insurance Prices for Visitors Coming to the USA? 5 Tips on How to Save!