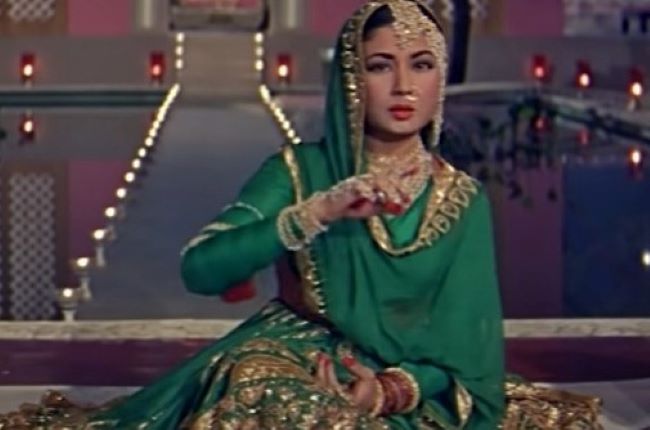 Gifted actors are expected to perform varied roles onscreen, even those totally contrary to their usual character, but return to their normal lives once the camera is switched off.

The problem begins when the dividing line between their reel and real life begins to blur. Meena Kumari, known for playing star-crossed characters heading for a tragic fate, became a hapless victim of the unfortunate blurring of this line separating the personal and the professional.

Portraying a wide gamut of wronged, silent, long-suffering — but dignified — Indian women, from passed-over love interests to neglected wives, in cinematic classics spanning from “Baiju Bawra” (1952) to “Sahib Bibi Aur Ghulam” (1962) to “Pakeezah”(1972), she could evoke such a lifetime of melancholy and anguish that it was difficult to believe that she was only in her 20s and 30s when she played these roles.

But what hung heavy over Meena Kumari (born Mahjabeen Bano), who passed away on this day 50 years ago, aged only 38, was that she was unable to pack up her grief along with the shooting schedule.

Her less than four-decade-long real life was scarcely enviable — a childhood overshadowed by the need to work to support her family — with her parents, small-time theatre artistes, seeking to achieve their desires vicariously through her, right from when she was just four.

Ultimately, director-producer Vikram Bhatt featured her as the hero’s daughter in his costumed drama “Leatherface” (1939), where the six-year-old was credited as “Baby Meena”. After a stint as a child artiste, it was Bhatt who eventually made her a household name with “Baiju Bawra”, a role for which she won the first Filmfare Award for Best Actress in 1954.

The same year, she would go on to marry filmmaker Kamal Amrohi, 15 years her senior, but after their fairy-tale romance, their marriage soon hit the rocks as he tried to set rules for her film career and even allegedly mistreated her, and they eventually separated.

Her personal life did not improve — she continued to suffer from a lack of genuine love and support, even as heavy drinking caused and exacerbated a grievous and, eventually, fatal illness.

She left an undeniable legacy, not only in winning the first two Filmfare Awards for Best Actress (1954 and 1955), but also had the unparalleled — and so far unbeaten — record of securing all the nominations in the Best Actress category — for “Sahib Bibi Aur Ghulam”, “Aarti” and “Main Chup Rahungi” at the 10th edition in 1963, as well as the sole posthumous nomination (for “Pakeezah”) in 1973.

It was not only about awards, though. Her strong roles and fame made even established male stars chary of appearing opposite her. Her self-confessed avid fan and early biographer, renowned journalist Vinod Mehta, noted that even Dilip Kumar grew flustered in her presence and Raaj Kumar frequently forgot his dialogues.

But she was encouraging to newcomers, and some of the earliest successes of Sunil Dutt, Rajendra Kumar, Dharmendra, and even Vinod Khanna (“Mere Apne”) were opposite her.

Although she was ruthlessly typecast onscreen as a quietly suffering woman in thrall to a dominant male figure, Meena Kumari, intelligent and sensitive as she was, did not remain entirely passive, and found free self-expression in Urdu poetry, where under the pen name “Naaz”, she could fashion some imaginative and striking imagery or convey motifs of endearing wistfulness or restrained sadness.

But then this was inaccessible to the majority, who only had recourse to some transliterations, occasional translations, and of course, the record “I Write, I Recite”, in which she performed some of her compositions, set to music by the evergreen Khayyam.

Scholar Noorul Hasan, who notes Meena Kumari’s “flirtations with the pen are as seductive as her universally celebrated femininity”, has brought her poetry to a wider audience, translating nearly 50 of her works into English, while also providing a transliterated version of the original for the bilingual connoisseur.

Her poetry also is a critical reaction to popular culture, especially the Bollywood version of it.

This is brought out well in the ‘nazm’ titled “Khaali Dukaan/The Empty Shop” with its wistfully expressed requirement of “Pyaar ka ek khoobsurat khwaab” and “Mohabbat ka ek purtapak lamha”, but “Bas inhi ek do cheezon ki main khareedar thi/ Aur waqt ki dukaan in cheezon se khaali hai”. The translation – “I came looking for nothing but these/And the shop of Time/Supplies none of these things” faithfully reproduces the rhythm.

Her poetry may be “sad, joyless, pessimistic, morbid,” but was “entirely in character with her life, or at least her comprehension of her life,” as Vinod Mehta observed in “Meena Kumari: The Classic Biography”.

But there was another side to Meena Kumari too.

This was perhaps her biggest tragedy.

Love of yoga fuels a $27 bn industry across America

Tips for Travelers with Diabetes