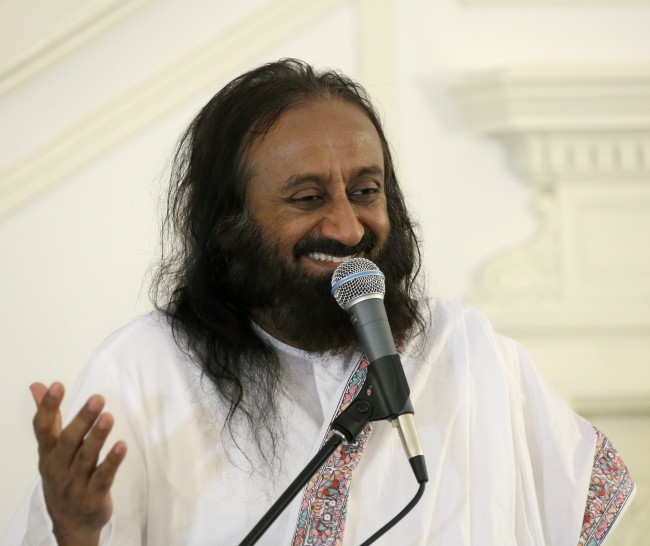 Sri Sri Ravi Shankar is the founder of the Art of Living Foundation. To learn more, please visit www.artofliving.org/atlanta or contact us at 877-AOLIVING or atlanta@us.artofliving.org.

“The purpose of religion is to bring enlightenment to the individual, happiness in society and to move from limited individual identity to universality and communion with the Divine. At their core, all religions have wisdom and human values which are universal. Customs and traditions were molded by people and their way of life at the time; that is why they are diverse. In terms of their origin, all religions are expressions of divine inspiration.

The whole idea of converting from one religion to another comes from a very narrow mindset — that one is better than the other. We need to see things from a broader perspective. Just like different flowers come up and blossom in different places according to their climate, different religions arose according to the need of the time and place throughout history. Similarly, just as a flower gives its fragrance to everyone equally, the wisdom in this world, from whichever religion it may be, does not belong only to one community; it is the collective heritage of the whole of humanity. Jesus’ message, Buddha’s teaching, the knowledge of yoga and meditation are relevant and beneficial to anybody in the world.

Converting religion does not bring salvation. The notion that you will be closer to God by changing religion is baseless. You get closer to God by feeling connected, internally. Inner transformation is real conversion. If you really want to convert, convert from violence and frustration to a loving and peaceful space within. Religions of the far east — Hinduism, Buddhism, Jainism, Shintoism, Taoism — always existed in harmony. Their main goal was uplifting consciousness and giving knowledge. Nobody told people that their way was the only way and everybody else would go to hell. In fact, people who think they hold the key to heaven create hell for everybody. Due to the cultural diversity in India, religion and regionalism has been a significant factor in politics. Luring poor people to converting by tempting them with money and other short-term benefits is an act of exploitation and is only done for ulterior political motives. However, people are realizing these sinister designs.

We need to educate people to take pride in whichever religion they belong to while honoring other religions; to broaden vision and deepen roots. This can be done by introducing multicultural, multireligious elements in education. If children grow up knowing a bit about all religions, they develop a sense of respect and belongingness with them. They do not grow up to be fanatics thinking that their religion is superior and others need to be ‘liberated’ and converted.

Our foremost identity is that we belong to One Divinity; we are all part of one human family. Then come these identities of gender, nationality and in the end, religion. Conflict arises when instead of identifying with Divinity, we identify with divisions. This sense of identity with humanness should prevail among all other identities. If we are able to focus on this universality, establish this sense of Oneness, then we would have achieved something great in this century. At a time like this when religious polarization is driving people apart, all that the world needs is love and understanding.”