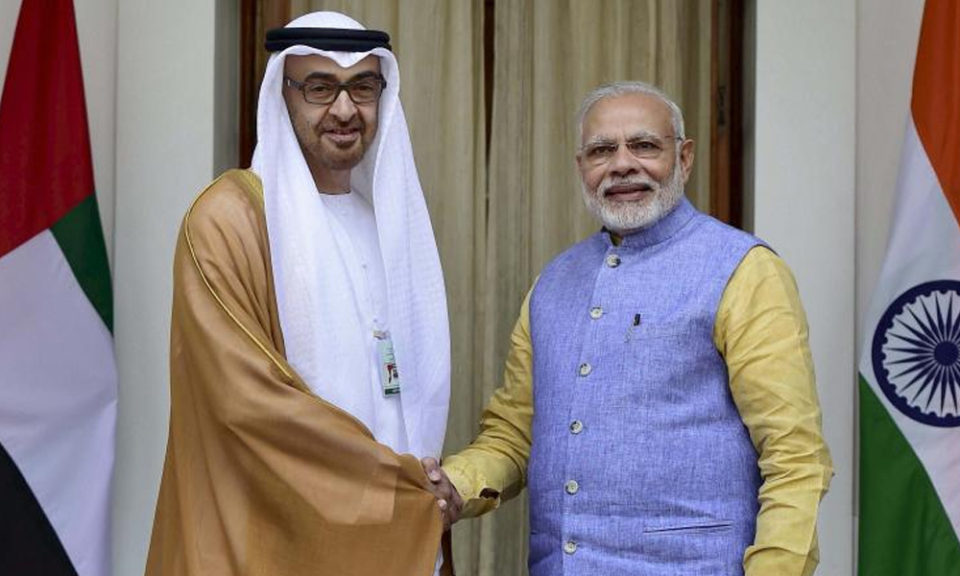 Abu Dhabi (UAE), June 3 (IANS) Prince Mohammed bin Zayed Al-Nahyan, the 58-year-old Crown Prince of Abu Dhabi and de facto ruler of the United Arab Emirates (UAE), is arguably the most powerful leader in the Arab world, according to the New York Times.

Prince Zayed, popularly known as MBZ, is among the most influential foreign voices in Washington, urging the US to adopt his increasingly bellicose approach to the region, the newspaper said in a detailed article on the suave Prince.

Significantly, MBZ, who is the Deputy Supreme Commander of the UAE’s Armed Forces, has played a key role in transforming the relations between India and his country in recent years.

The testimony to the special emphasis that the UAE has lately been giving to its relations with India was visible on May 31 when the facade of the iconic ADNOC Group Tower in Abu Dhabi was lit up with the flags of India and the UAE and portraits of Prime Minister Narendra Modi and Abu Dhabi Crown Prince Mohammed bin Zayed Al Nahyan to mark the swearing in of the Indian leader.

The ADNOC (Abu Dhabi National Oil Co) is the state-owned oil firm of the UAE.

“Now this is true friendship! As PM @narendramodi is sworn in for a second term in office, the iconic @AdnocGroup tower in Abu Dhabi is lit up with India and UAE flags and portraits of our PM and of HH Sheikh,” Indian Ambassador to the UAE Navdeep Singh Suri tweeted and tagged a video of the lit tower.

Suri told WAM news agency that India-UAE relations witnessed “a real transformation” since Modi’s visit to the UAE in August 2015.

“The close friendship that has blossomed over the last four years between our Prime Minister and the Crown Prince is well known. The whole world can see it today in this unique celebration of the re-election of the Prime Minister for a fresh five-year term,” the envoy said.

Suri added that the transformed relations made an unprecedented impact in areas such as trade and investment flows, food and energy security, manpower and skills, literature and culture, defence, space and security cooperation, and growing people-to-people connections.

Particularly, in the area of security cooperation between India and UAE, there has been a significant change in the attitude of the UAE government, mainly because of MBZ.

The UAE, which used to be a hiding den for the people wanted for various crimes in India, is no more so as a number of such outlaws have been quietly or pronouncedly handed over to Indian authorities in the last few years.

The most high profile case of deportation on December 5 last year was that of Christian Michel, a British national and alleged middleman in the politically-sensitive Rs 3,600 crore AgustaWestland VVIP helicopter deal.

From the point of the sway MBZ holds internationally, his influence on Washington under the Trump Administration appears greater than ever, the New York Times said.

“He has a rapport with President Trump, who has frequently adopted the prince’s views on Qatar, Libya and Saudi Arabia, even over the advice of cabinet officials or senior national security staff,” the article said.

“Western diplomats who know the prince say he is obsessed with two enemies, Iran and the Muslim Brotherhood. Trump has sought to move strongly against both and last week took steps to bypass Congressional opposition to keep selling weapons to both Saudi Arabia and the United Arab Emirates,” it added.

Quoting Ben Rhodes, a Deputy National Security Adviser under President Barack Obama, the newspaper said: “MBZ has an extraordinary way of telling Americans his own interests but making it come across as good advice about the region.”

When it comes to influence in Washington, Rhodes added: “MBZ is in a class by himself.”

The newspaper said Prince Mohammed worked assiduously before the US Presidential election to crack Trumpa¿s inner circle and secured a secret meeting during the transition period with the President’s son-in-law, Jared Kushner.

The prince also tried to broker talks between the Trump administration and Russia, a gambit that later entangled him in the special counsel’s investigation into foreign election interference.

The article said that MBZ is unlike most of the Arab royals who are paunchy, long-winded and prone to keep visitors waiting.

He graduated at age 18 from the British officers’ training programme at Sandhurst. He stays slim and fit, trades tips with visitors about workout machines, and never arrives late for a meeting, the Times said.

American officials invariably describe him as concise, inquisitive, even humble. He pours his own coffee, and to illustrate his love for America, sometimes tells visitors that he has taken his grandchildren to Disney World incognito, the article said.

He makes time for low-ranking American officials and greets senior dignitaries at the airport. With a shy, lopsided smile, he will offer a tour of his country, then climb into a helicopter to fly his guest over the skyscrapers and lagoons of Dubai and Abu Dhabi.

When he meets Americans, Prince Mohammed emphasizes the things that make the UAE more liberal than their neighbours. Women have more opportunities: A third of the cabinet ministers are female, the article said.

“Unlike Saudi Arabia, the UAE allows Christian churches and Hindu or Sikh temples, partly to accommodate a vast foreign work force. (The country is estimated to have nine million residents, but fewer than a million citizens; the rest are foreign workers.)”

To underscore the point, the prince last year created a Ministry of Tolerance and declared this the “Year of Tolerance.” He has hosted the Special Olympics and Pope Francis.