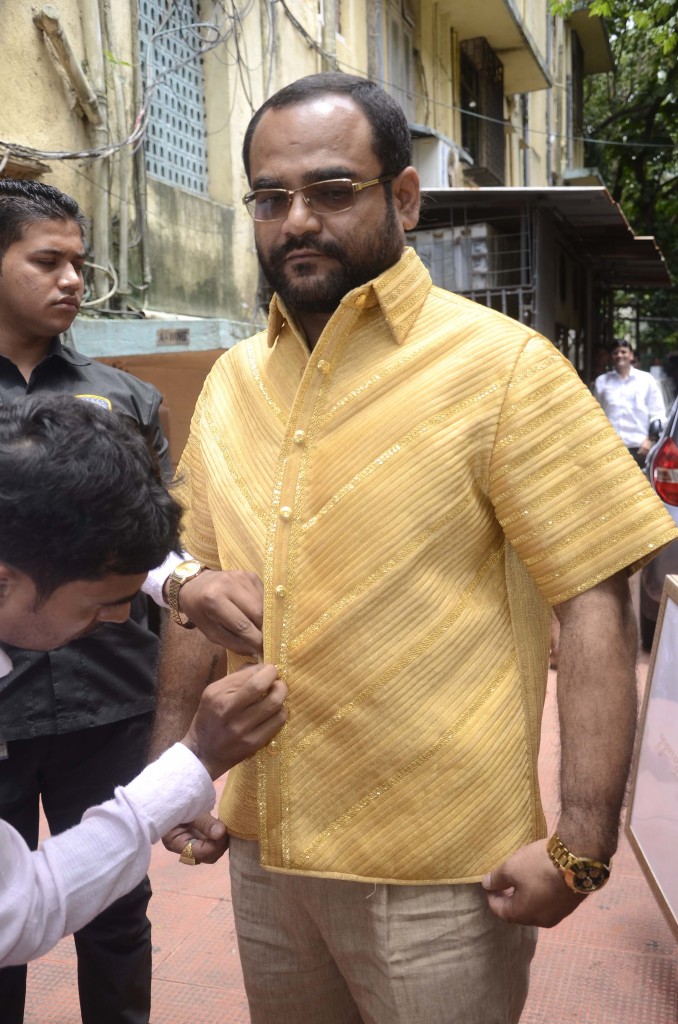 But then, Pankaj Parakh, a school dropout who made his fortune from his garment fabrication business and who is a corporator to boot, is no stranger to opulence. Whenever he ventures on to the streets in Yeola, 260 km from Mumbai, women stare at him and men glare at him as he is adorned with gold jewellery weighing at least two-three kg.

Now, at a special function on his 45th birthday Friday, Parakh will wear his latest acquisition at a huge gathering that will include the likes of Maharashtra Tourism Minister Chhagan Bhujbal of the Nationalist Congress Party (NCP) and around a dozen legislators of different parties and celebs.

With the shirt and its seven gold buttons, Parakh hopes to enter the Guinness World Records and the Limca Book of Records.

“Gold has always fascinated me since I was five years old and studying in school. Over the years, I have become passionate about this royal metal. I have got this special shirt stitched to mark my 45th birthday this Friday,” Parakh told IANS in an exclusive tete-a-tete here.

The shirt was designed by Bafna Jewellers of Nashik, 85 km away, and meticulously executed by Shanti Jewellers at Parel in Mumbai, where a team of around 20 select artisans spent 3,200 hours over the past two months to ‘stitch’ it.

Parakh, who took delivery in Mumbai, offered a sneak peek of his treasured shirt and even wore it for a darshan of the city’s famed Siddhivinayak Temple before posing for some pictures near the temple, while curious onlookers watched from a distance.

He said that the gold used in the shirt is of 18-22 carat purity, without any mixture of any other metals – and the entire deal is properly accounted for (an assurance to snoopy tax sleuths!).

Though made of gold, the shirt is fully flexible and comfortable, absolutely smooth and harmless and with a thin cloth lining the inside to avoid rubbing the body.

Besides, it can be washed and hung-dried, and if torn or damaged, can be repaired and modified with a lifetime guarantee of durability, Parakh said.

Recounting his love for gold, Parakh said that in his youth, he could not afford much as he left school after Class 8 and plunged into the family garments business in Yeola, a town of some 60,000 where he is an NCP corporator.

“Yet, for my marriage 23 years ago, many guests considered me an embarrassment as I sported more gold than the bride,” he recalled with a chuckle.

Over the years, after taking care of all his family’s needs – a good house looked after by wife Pratibha and higher education for his two doting sons Siddharth (22) and Rahul (19), both now in college – Parakh likes to plough back his excess income to finance his passion for acquiring a gilded edge.

“My family is hardly impressed or interested in my love for gold. They just ignore and accept it as a part of domestic life. But the rest of my extended family thinks I am weird,” Parakh laughed.

Parakh remembered that when the family attends weddings, he adorns himself with around three kg gold ornaments while his wife looks stark with her 40-50 grams!

“In public, when I go around Yeola, or meet my constituents, I get extreme reactions – some say I flash my wealth, others feel I am poking fun at people’s poverty, though women are usually silent observers,” he smiled.

However, he felt that though there are many wealthy people in the country, it is his passion for gold – and sheer guts, bolstered by his licensed revolver – that makes him wear so much of the precious yellow metal.

After launching his independent garment business in 1982, he also plunged into politics and has been an elected corporator since 1991.

Yeola is renowned for its Paithani silk saris and the Shalu and Pitamber varieties of saris, considered nationally-recognised brands.

However, despite all the glitter of gold, Parakh turns out to be a genuine, down-to-earth and caring human being, deeply involved in a variety of social and educational activities.

For instance, he has fully financed 120 polio operations in the past five years through the renowned Narayan Seva Sansthan Hospital of Udaipur in Rajasthan.

“I spend at least a week each year to offer voluntary services at the 1,000-bedded hospital, the biggest and best for polio treatment in India. I also arrange for any requirements of the poor patients like food, medicines, surgery and blankets, from which I get immense satisfaction,” Parakh said.

Last year Datta Fuge, a businessman from Pimpri-Chinchwad, entered the Guinness World Records with a gold shirt costing Rs.1.27 crore – a record that Parakh hopes to break this year.