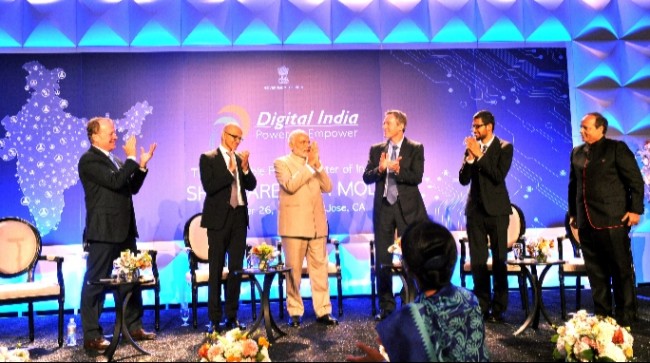 San Jose (California), Sep 27 (IANS) Following is the text of Prime Minister Narendra Modi’ speech at the “Digital India” dinner with Who’s Who of the tech world:

A big thank you!

I am sure this was not pre-arranged. But, here on stage you see a perfect picture of India-US partnership in the digital economy.

If there was ever a gathering under one roof that could claim to be shaping the world, it is this. And, I am not talking about those in public office, here or in India! It’s a great pleasure to be here in California. It is one of the last places in the world to see the sun set. But, it is here that new ideas see the first light of the day.

It’s a great honour that you have joined us tonight. I have met many of you in Delhi and New York, and on Facebook, Twitter and Instagram.

These are the new neighborhoods of our new world.

If Facebook were a country, it would be the third most populous one and the most connected.

Google today has made teachers less awe-inspiring and grandparents more idle. Twitter has turned everyone into a reporter. The traffic lights that need to work the best are on CISCO routers.

The status that now matters is not whether you are awake or asleep, but whether you are online or offline. The most fundamental debate for our youth is the choice between Android, iOS or Windows.

From computing to communication, entertainment to education, from printing documents to printing products, and, now to internet of things, it’s been a long journey in a short time.

From cleaner energy to better healthcare and safer transport, everything is converging around the work you do.

In Africa, it’s helping people transfer money on phone. It has made reaching small island states no longer a journey of adventure, but a convenient click of a mouse.

In India, a mother in a distant hill village has a better chance to save her new born infant. A child in a remote village has better access to education.

A small farmer is more confident about his land holding and getting better market price. A fisherman on the sea has a better catch. And, a young professional in San Francisco can Skype daily to comfort her sick grandmother in India.

An initiative by a father in Haryana for “Selfie with daughter” to draw attention to the girl child became an international movement.

All this is because of the work you people are doing. Since my government came to office last year, we have attacked poverty by using the power of networks and mobile phones to launch a new era of empowerment and inclusion: 180 million new bank accounts in a few months; direct transfer of benefits to the poor; funds for the unbanked; insurance within the reach of the poorest; and, pension for the sunset years for all.

By using Space technology and internet, we have been able to identify in the last few months 170 applications that will make governance better and development faster.

When a small craftsman in a village in India brings a smile to a customer looking at his phone on a metro ride in New York; When a heart patient in a remote hospital in Kyrgyz Republic is treated by doctors sitting in Delhi, as I saw in Bishkek, we know we are creating something that has fundamentally changed our lives.

The pace at which people are taking to digital technology defies our stereotypes of age, education, language and income. I like recounting my meeting with a group of unlettered tribal women in a remote part of Gujarat. They were present at a local milk chilling plant I was inaugurating. They were using cell phones to take photographs of the event. I asked them what they would do with the images. The answer was a surprise for me.

They said,they would go back, have the images downloaded on to a computer and take printouts. Yes, they were familiar with the language of our digital world.

And, farmers in Maharashtra state have created a Whatsapp group to share information on farming practices.

Customers, more than creators, are defining the use of a product. The world may be driven by the same ancient impulses. We will continue to see human struggles and successes. We will witness human glory and tragedies.

But, in this digital age, we have an opportunity to transform lives of people in ways that was hard to imagine just a couple of decades ago.

This is what sets us apart from the century that we have just left behind. There may be still some who see the digital economy as the tool of the rich, educated and the privileged. But, ask the taxi driver or the corner vendor in India what he has gained from his cell phone, and the debate gets settled. I see technology as a means to empower and as a tool that bridges the distance between hope and opportunity. Social media is reducing social barriers. It connects people on the strength of human values, not identities.

Today, technology is advancing citizen empowerment and democracy that once drew their strength from Constitutions. Technology is forcing governments to deal with massive volume of data and generate responses, not in 24 hours but in 24 minutes.

When you think of the exponential speed and scale of expansion of social media or a service, you have to believe that it is equally possible to rapidly transform the lives of those who have long stood on the margins of hope. So, friends out of this conviction was born the vision of Digital India.

It is an enterprise for India’s transformation on a scale that is, perhaps, unmatched in human history. Not just to touch the lives of the weakest, farthest and the poorest citizen of India, but change the way our nation will live and work.

For nothing else will do in a country with 800 million youth under the age of 35 years, impatient for change and eager to achieve it.

We will transform governance, making it more transparent, accountable, accessible and participative. I spoke of E-Governance as a foundation of better governance – efficient, economical and effective.

I now speak of M-Governance or mobile governance. That is the way to go in a country with one billion cell phones and use of smart phones growing at high double digit rates. It has the potential to make development a truly inclusive and comprehensive mass movement. It puts governance within everyone’s reach.

After MyGov.in, I have just launched the Narendra Modi Mobile App. They are helping me stay in close touch with people. I learn a great deal from their suggestions and complaints.

We want to free our citizens from the burden of excessive paper documents in every office. We want paperless transactions. We will set up a digital locker for every citizen to store personal documents that can be shared across departments.

We have set up Ebiz portal to make approvals for businesses and citizens easy and efficient so that they concentrate their energy on their goals, not on government processes.

We are using technology to impart scale and speed to development.

But for all this, we must bridge the digital divide and promote digital literacy in the same way that we seek to ensure general literacy.

We must ensure that technology is accessible, affordable, and adds value.

We want our 1.25 billion citizens to be digitally connected. We already have broadband usage across India go up by 63 percent last year. We need to accelerate this further.

We have launched an aggressive expansion of the National Optical Fibre Network that will take broadband to our 600,000 villages. We will connect all schools and colleges with broadband. Building I-ways are as important as highways.

We are expanding our public Wi-Fi hotspots. For example, we want to ensure that free Wi Fi is not only there in airport lounges, but also on our railway platforms. Teaming up with Google, we will cover 500 railway stations in a short time.

We are also setting up Common Service Centres in villages and towns. We will also use information technology to build smart cities.

And, we want to turn our villages into smart economic hubs and connect our farmers better to markets and makes them less vulnerable to the whims of weather.

For me, access also means that content should be in local languages. In a country with 22 official languages, it is a formidable, but an important task.

Affordability of products and services is critical for our success. There are many dimensions to this. We will promote manufacture of quality and affordable products in India. That is part of our vision of Make in India, Digital India and Design in India.

As our economy and our lives get more wired, we are also giving the highest importance to data privacy and security, intellectual property rights and cyber security.

And,I know to achieve the vision of Digital India, the government must also start thinking a bit like you.

So, from creating infrastructure to services, from manufacture of products to human resource development, from support governments to enabling citizens and promoting digital literacy, Digital India is a vast cyber world of opportunities for you.

The task is huge; the challenges are many. But, we also know that we will not reach new destinations without taking new roads.

Much of India that we dream of is yet to be built. So, we have the opportunity to shape its path now.

And, we have the talent, enterprise and skills to succeed.

We also have the strength of the partnership between India and the United States.

Indians and Americans have worked together to shape the knowledge economy. They have made us aware of the vast potential of technology.

From large corporate to young professionals in this great centre of innovation, each can be part of the Digital India story.

The sustainable development of one-sixth of humanity will be a major force of good for our world and our planet.

Today, we speak of India-U.S. partnership as a defining partnership of this century. It hinges on two major reasons. Both converge here in California.

We all know that the dynamic Asia Pacific Region will shape the course of this century. And, India and the United States, the world’s two largest democracies, are located at the two ends of this region.

We have the responsibility to shape a future of peace, stability and prosperity in this region.

Our relationship is also defined by the power of youth, technology and innovation. These can ignite a partnership that will advance and sustain prosperity in our two countries.

Even more, in this Digital Age, we can draw on the strength of our values and partnership to shape a better and more sustainable future for the world.