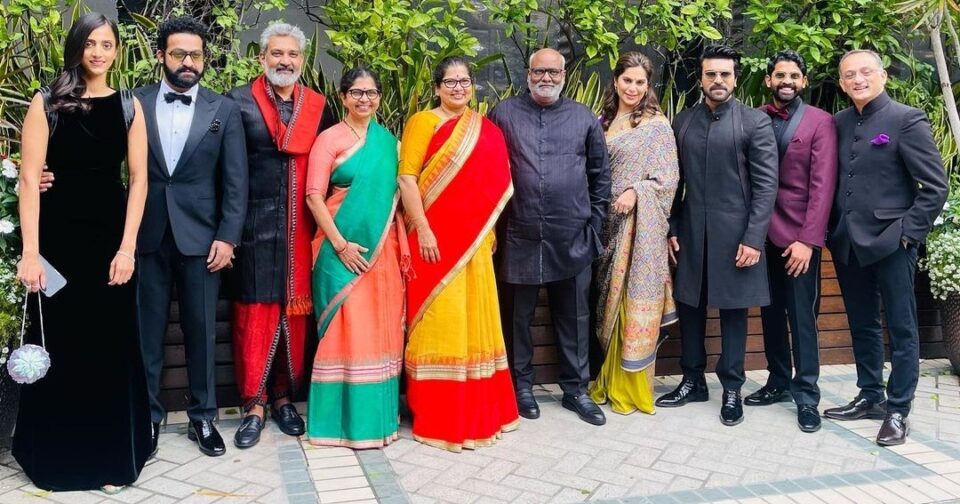 Los Angeles, Jan 11 (IANS) As India bagging a Golden Globe for the number ‘Naatu Naatu’ has made headlines, the Indian attire sported by the ‘RRR’ family too grabbed eyeballs at the event.

‘RRR’ brought home the Golden Globe for Best Original Song in Motion Picture for the song ‘Naatu Naatu’, however, the film lost out the bigger share of the pie — that of the Best Motion Picture Non-English award to the Argentine film ‘Argentina, 1985’.

It was Ram Charan, his wife Upasana, M. M. Keeravaani, his wife Srivalli S. S. Rajamouli and his better half Rama Rajamouli, who unlike any other global star chose to flaunt the Indian wear at the ceremony.

Ram Charan looked every inch dapper in an all black Kurta paired with straight pants and sunglasses. His wife Upasana dolled up in a printed saree.

Rajamouli chose a black kurta, red dhoti pants and a crisp red dupatta while his wife Rama, a costume designer, opted for a green and orange Kanjeevaram saree.

Keeravaani seemed to join the gang with a black kurta and straight pants. His wife chose a bright yellow and orengish-red nine-yard wonder.

Jr. NTR looked every inch handsome as he opted for a black suit paired with a bow-tie and a white shirt.

‘RRR’ centres around two real-life Indian revolutionaries, Alluri Sitarama Raju and Komaram Bheem, their fictional friendship and their fight against the British Raj.

Set in the 1920s, the plot explores the undocumented period in their lives when both the revolutionaries chose to go into obscurity before they began the fight for their country.