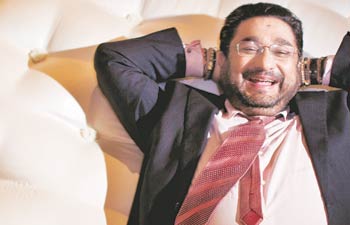 Angad fell eight storeys on Sunday night, landing on the roof of another building below. Paramedics pronounced the 45-year-old dead at the scene in central London, Mirror Online reported.

Police on Sunday night said there were no suspicious circumstances and they were investigating the incident.

Angad was the CEO of Caparo Industries steel firm situated on Baker Street in London.

Caparo Industries is reported to be on the brink of going into administration as a fallout of the UK steel crisis.

Caparo reported an annual operating loss of 700,000 pounds for 2014 as compared with the previous year’s profit of 3.1 million pounds.

Its UK operations posted much higher losses at 2.5 million pounds, compared with the 1.7 million pounds profit made the year before.

Its interests include manufacture of car components and steel pipes, hotels and hospitality.

Several other projects include manufacture of superfast cars, films and design.

Britain’s steel industry has fallen into a deep crisis due to cheap Chinese imports, higher energy costs and the current strength of the pound sterling.

Caparo, which had an auto ancillary unit in Singur in India’s West Bengal state, still has 18 acres of land in the area.