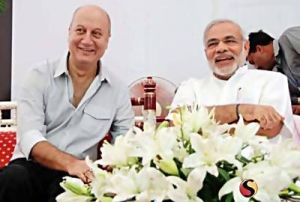 New Delhi, Nov 7 (IANS) Prime Minister Narendra Modi on Saturday met a delegation of artistes led by Bollywood actor Anupam Kher protesting against a section of artistes who are returning their awards over “intolerance” in the country.

“He (Modi) listened to us and said the intolerance issue is harming the country and its reputation,” Kher said after meeting the prime minister.

“The filmmakers and documentary makers must make an attempt to talk to the PM and not wait for the government to contact them. We have to express our anguish but nothing should come between us and the integrity of the nation to be discussed outside India in an intolerant manner,” he added.

Earlier on Saturday, the delegation led a ‘March for India’ to protest against those returning their awards over intolerance.

After the march, Kher called on President Pranab Mukherjee, and described it as a “great meeting” where he raised concerns about the ‘award wapsi’ by various people.

Kher also said the Prime Minister’s Office had invited renowned Urdu poet Munawwar Rana, but he has not replied to it so far.

On October 18, Rana had returned his Sahitya Akademi award along with the Rs.1 lakh cash prize amid the ongoing debate over growing intolerance. Rana had said that if he is called by the PMO, he will go and meet Modi.