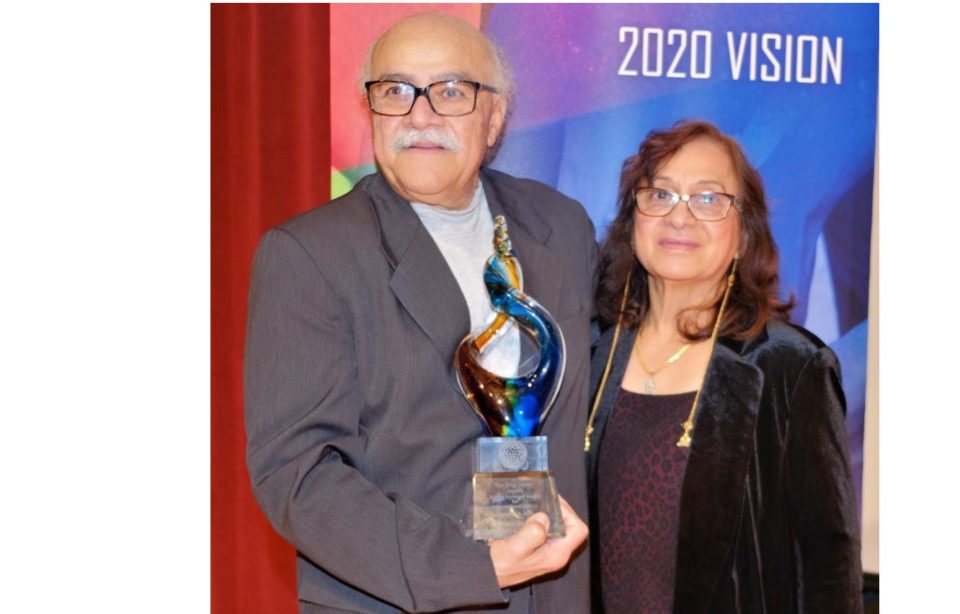 Atlanta, GA, February 6, 2020: It is awards galore for Atlanta Indian-American community leaders and trailblazers, Subash Razdan and Prof. Jag Sheth. While the former was recognized in the United States for his distinguished contributions to International Affairs, the latter was felicitated with India’s highest honors, Padma Bhushan award 2020. Incidentally, Razdan was nominated for the Padma Bhushan award in 2011.

Razdan, Chairman and Co-Founder of Gandhi Foundation USA (GFUSA) was felicitated with the Dream Forward Community Service Award in the International Affairs award category on Friday January 14, 2020 at the King Center in Atlanta. Dream Forward Awards are an initiative by The King Center to recognize people and groups that have made significant impacts in their communities and those who work closely with The King Center.

The 2020 tribute marks the 52nd anniversary of King’s death and the 36th consecutive year that DeKalb has hosted the employee-planned event honoring the life and legacy of Dr. King.

“King’s 2020 Vision: The Beloved Community – The Fierce Urgency of Now,” was held on Jan. 17, at the Maloof Auditorium, in Decatur.

GFUSA celebrated Dr. King’s 91st birthday on January 20 with the garlanding of the Gandhi statue and peace march and homage/wreath laying at the King’s center.

“Naturally, I am humbled for this great honor to be recognized at the launching of the week long celebrations of Dr. King’s birth Anniversary,” quoted Razdan.

“I am dedicating this to the Gandhi Foundation, King Center, National Park Service, Indian Embassy/Consulate and the diverse community team and partnership,” said Razdan.  “I’m particularly grateful to the friendship of the King family and leadership starting with Late Mrs. Coretta Scott King, and followed by Dr. Christine King Farris, Isaac Farris, Dr. Berniece King from the mid-eighties. Our friendship is still going strong.”

“Name one place in the world (outside of India) where you have a full life size Gandhi Statue and a Gandhi Room in close proximity,” asked Razdan, following up with gratitude to the King family for making it a reality.

Razdan spearheaded the call for the installation of the Mahatma Gandhi Statue in Atlanta since 1991. His dream finally bore fruition on January 24, 1998.

Razdan recognized members of the Gandhi Foundation present and thanked them for their support. Razdan thanked his life-partner, Raj Razdan for her support through the years. Raj Razdan has a dedicated record of civic-social and professional accomplishments and recognition.

No stranger to recognitions, Razdan, an honor roll IIT Delhi Alumni is the recipient of the prestigious Ellis Island Medal of Honor in 2003, the “Pride of India” award for outstanding contribution towards betterment of Indo-US ties at the American Center on January 12, 2008, the Pravasi Bharatiya Samman award during the 2008 Pravasi Bharatiya Divas celebrations in New Delhi, India, “Ambassador for Peace” by the Universal Peace Federation and the Interreligious and International Federation for World Peace in a ceremony in November 2007 in USA, the 2007 Mahatma Gandhi Award at a Banquet in Beverly Hills Hilton Hotel in California by the Mayor of Los Angeles, 2006 Georgia Minority Business (GMB) Neophyte Award, among many, many more.

A small testament to his intellect and leadership are the many firsts Razdan stakes claim to, including selection in the inaugural class of Diversity Leadership Academy, introduction of the first Indian-American TV show, first Spelling Bee in Georgia and Alabama, first beauty pageant under IACA, lobbying  successfully for the first mobile Indian visa/consular services, and organizing film festivals.

Razdan has been a much sought-after speaker, a judge for various events, and has written editorials/articles for the prestigious Atlanta-Journal Constitution and various other Indian American newspapers. Razdan also serves in advisory capacity for the boards of many organizations, such as GCC, LWV, amongst others.

Subash Razdan may have way too many feathers in his cap of accomplishments, but his zest for life and liberty are perennial. While he may officially be the “Pride of India”, he certainly is the “Pride of Atlanta”.

CDC preparing to battle coronavirus as if it’s a ‘pandemic’, 12 cases confirmed in the US