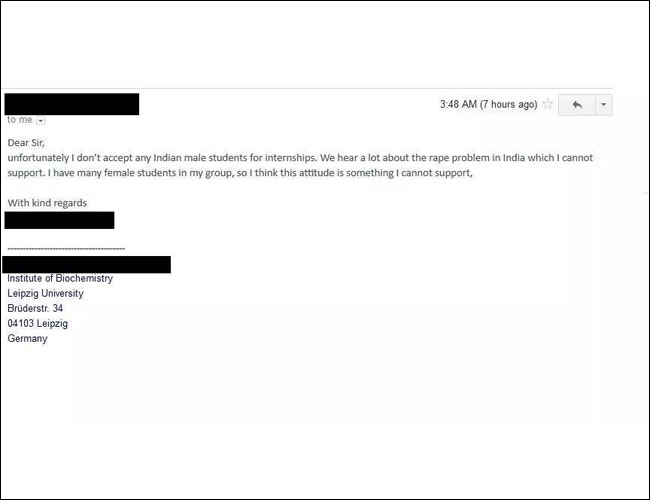 New Delhi, March 9 (IANS) A professor from Leipzig University in Germany denied internship to an Indian male student citing the “rape problem” in India, but later offered an apology when Germany’s ambassador to India intervened and suggested the professor needed to “learn more about the diverse, dynamic and fascinating” country.

The screenshots of email replies to the Indian student by professor Annette Beck-Sickinger of Leipzig’s Institute of Biochemistry had gone viral on various social networking websites with many questioning their authenticity.

“Unfortunately I don’t accept any Indian male students for internships. We hear a lot about the rape problem in India which I cannot support. I have many female students in my group, so I think this attitude is something I cannot support (sic),” read the screenshot of an email sent by the professor.

“Many female professors in Germany decided to no longer accept male students for these reasons, and currently other European female association are joining. Of course, we cannot change or influence the Indian society, but only take our consequences here in Europe,” read another email Beck-Sickinger wrote to the student.

But soon after the German embassy in India on Monday uploaded a letter by Germany’s ambassador to India Michael Steiner on its website, there was no doubt about the authenticity of the emails.

In a scathing letter to the professor, Steiner wrote: “I would encourage you to learn more about the diverse, dynamic and fascinating country and the many welcoming and open-minded people of India so that you could correct a simplistic image, which — in my opinion — is particularly unsuitable for a professor and teacher.”

Later, Beck-Sickinger said she was sorry about the emails.

“Of course I have nothing against male Indians and I have accepted several Indian students in the past,” The Huffington Post reported her as saying.

“However my lab is full and I currently cannot take any student. This led to an unpleasant discussion with one of the Indian students,” she said.