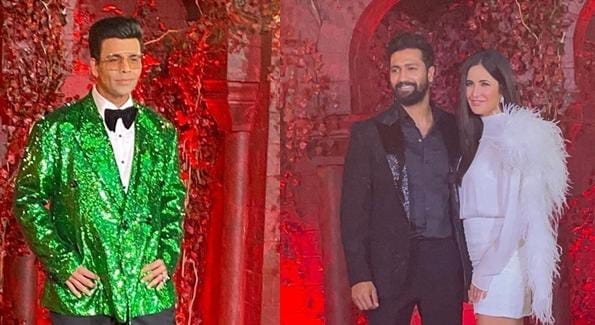 Mumbai, May 26 (IANS) Karan Johar celebrated his 50th birthday in grand style at the Yash Raj Films studio at Andheri West in Mumbai. The entire B-town erupted in celebrations as an array of celebrities swarmed the venue to celebrate the Dharma Productions head honcho’s birthday.

The red carpet event saw celebrities literally putting their best foot forward. The party theme was black and bling. The birthday boy dressed up in a green shimmery tuxedo, which he paired with white shirt and black pants. He was joined by Dharma Productions CEO Apoorva Mehta.

Red was also the colour of choice for Shweta Bachchan Nanda. Her daughter Navya Naveli Nanda arrived later, posing for shutterbugs with her friend Ananya Panday. Their other friend Shanaya Kapoor was there as well — Suhana Khan, the remaining member of their gang, gave the party a miss, like her father, Shah Rukh Khan.

Among the other absentees were Karan’s mentee Alia Bhatt, Deepika Padukone and Arjun Kapoor.

The party setup was designed by Amrita Mahal, who has created the sets of films such as ‘Kalank’, ‘Brahmastra’, ‘Yeh Jawaani Hai Deewani’ and ‘Rocky Aur Rani Ki Prem Kahani’.