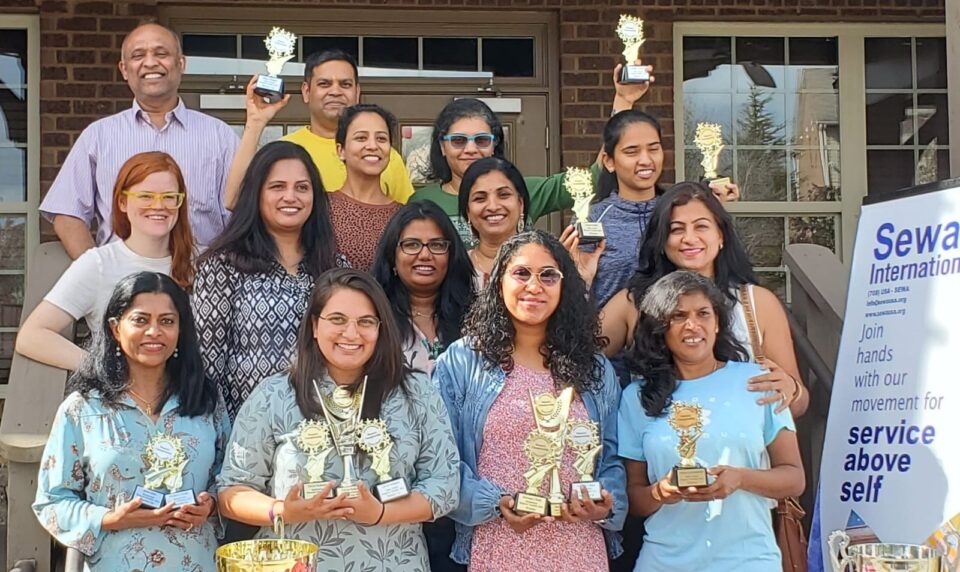 The SEWA Women’s outdoor events started early for the Sewa volunteers coordinating, setting up logistics for this tournament. The chief guest of the day was Dr. Syamala Erramilli along with her husband Bob Erramilli, who is a Johns Creek City Council member, who were accompanied by Vikas Arora, a Sewa volunteer. They inaugurated the event with the Lord Ganesha invocation prayer and the traditional lighting of the lamp. Dr. Syamala emphasized how important it is for women to stay active and motivated so that they can be good role models for their children. She also advised how staying active helps one with endorphins which in turn helps avoid depression. She appreciated Sewa for conducting sports events, as otherwise people would be cooped up in their homes, binging web series or movies.

The cricket competition had a wonderful response. It was ably conducted by match referee Vijay Vaghela. A total of six teams, ATL Strikers, Crickootam, Ferocious Feathers, Firebirds, Magic Makers, and Wildbrooke Warriors., participated.  There were some tough competitive and super over matches played by these energetic women with full sportswomen ship and enthusiasm. The Cricket Championship was won by the Firebirds team, while Crickootam came second; ATL Strikers third, and   Wildbrooke Warriors fourth.

Complimentary lunch and drinks were provided to the participants, under the able guidance of Amaresh Parvathaneni and Murali Rajgopalan.

This was followed by the afternoon session, which was graced by the presence of Mrs. Raj Razdan, Founder/Exec.Dir. of Senior Citizens Program, Inc. Atlanta, GA. She also highlighted the importance of women’s well-being and staying active. She emphasized that parents should empower young girls to make their own decisions and live their dreams from young age so they can become strong and independent members of the society. She congratulated all the women who came forward and participated in the event and encouraged them to continue to do so.

Overall, it was a joyous, memorable day with two sports events. All the participants were happy and excited and expressed interest in participating again in such future sporting events. Event organizing team led by Neetu Singh Chauhan, Pallavi Panthri, Vani Gaddam, Usha Palagiri, Garima Saini put in their best efforts in organizing the competitions. Thanks to Vijai Ganapa, Sewa Sports coordinator for guiding the team, Chanchal for coordinating Teen volunteers, Prakash Srivastava for technical and marketing help. Shobit Panthri and Raghav Tavva for the amazing pictures and videos of the events.

Ms. Veena Rao was the chief guest for the morning event, accompanied by the President of the Atlanta Sewa Chapter, Mr. Srikanth Gundavarapu. Ms. Veena Rao is an award-winning journalist and author of critically acclaimed novel ‘Purple Lotus’ as well as the founder, publisher, and editor in chief of NRI Pulse, an Atlanta based news publication. She spoke on the importance of “sportswoman ship” and how giving one’s 100% is far more important than winning.  Srikanth ji amplified this by stating that active women in the family allows the whole family to maintain a healthy lifestyle.

This was followed by an early afternoon event, graced by the presence of Dr. Debra Miller, accompanied by Swadesh Katoch and Vikas Arora, Atlanta-based Sewa International leaders. Dr. Miller has 21 years of oncology experience and has been with Gwinnett Medical since 2016. She highlighted the importance of sports and exercise on health as well as the sisterhood fostered in this process. Swadesh ji elaborated on the wonderful volunteering services that Sewa provided to the community during the pandemic.

Cricket and Kho-Kho champions from the September 18th event were presented with their customized individual trophies from the Chief guest Dr. Miller.

The nail-biting Badminton championship was won by Divya Seshadri in the singles category, with Sreekala Ullati in second; Sharoon Shetty in third, and Srivalli Budaraju in fourth positions. In the doubles championship, Sreekala Ullati & Bhavana Yedlapalli were first; with Swopna George & Anna John in second, Radhika Baishya & Chaitali Nadkarni in third, and Srivalli Budaraju & Sharaddha Javeri in fourth positions.

The evening’s Chief guest was Mrs. Jyothi Chintalapudi, a Guru, Founder/ director of Kuchipudi Dance Academy, and also a Board member of the Sanjeevani multispecialty hospital in Kuchipudi, in Andhra Pradesh.  She enthused all the evening participants with a motivating speech and presented the awards to the winners of the badminton championship.

An extra special thanks to all the incredible cheerful participants who stepped up to referee the matches. Go Sewa!!!

The title sponsor of the outdoor and indoor event  was SlayRX, the sports drink maker, whose generous contributions would go towards the S.H.E program( https://she.sewausa.org , whose objective is to create livelihood for economically weaker and vulnerable women through market-driven skill development training as well as personality development and mental awareness.

Amazon plans to lay off 10,000 of its workforce: Report