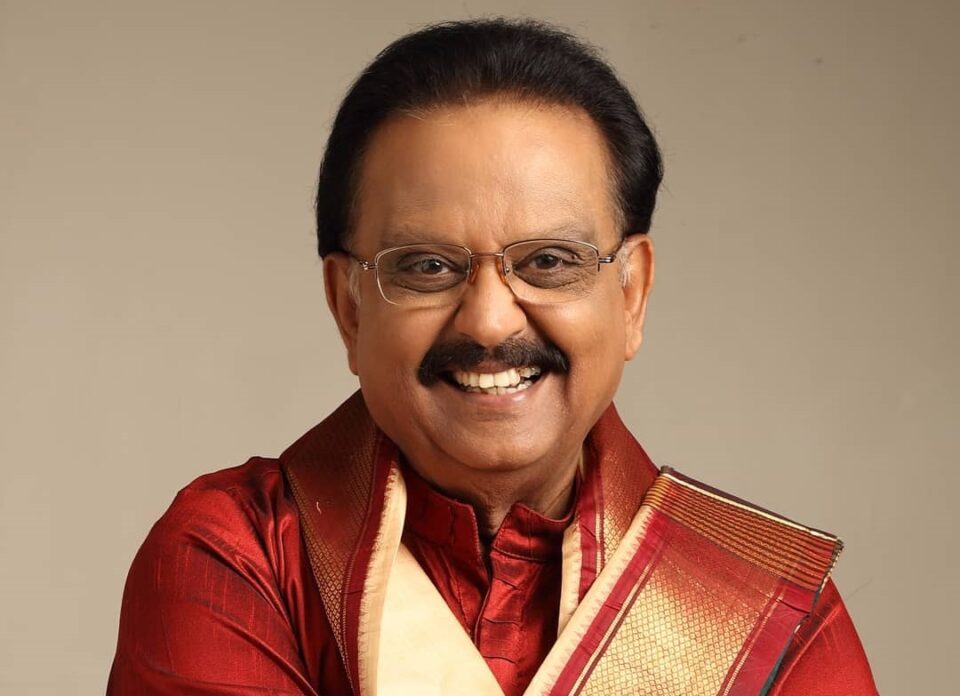 Chennai, Sep 25 (IANS) S.P. Balasubrahmanyam or popularly SPB, the playback singer, as well the voice over, of popular heroes of Tamil, Telugu, Malayalam, Kannada and Hindi movies has gone silent permanently on Friday.

The coronavirus attacked his lungs and permanently silenced the singer who had sung over 40,000 songs in 16 languages over a career spanning five decades.

On August 5, in a Facebook post, the 74-year old SPB said that he was suffering from a very mild attack of coronavirus and had got himself hospitalized to take rest.

He had said that though the doctors had advised him to stay at home and take rest, he decided to be in a hospital, as at home his family members would get concerned.

He hoped to get discharged from the hospital in two days. But it was not to be.

The man who had sung the one of the popular duets with P. Susheela “Aayiaram Nilevae Vaa” (Come thousand moons) for M.G. Ramachandran (MGR) in the Tamil movie Adimai Penn has finally reached the stars, perhaps to sing for the Gods.

Curiously, during his over five decades of playback singing career, SPB has sung several moon songs.

He is survived by wife Savitri, a son S.P. Charan – a movie producer and playback singer, and daughter Pallavi.

Honored with Padma Shri and Padma Bhushan awards in 2001 and 2011 respectively, SPB has won six National Film Awards for the best male playback singer and several other state awards.

Born to S.P. Sambamurthy, a Harikatha artist and mother Sakunthalamma on June 4, 1946, SPB got interested in music at a young age. His younger sister P. Sailaja was also a movie playback singer.

While pursuing his engineering course, he used to participate in singing competitions and won prizes.

“At one such competition, popular playback singer S. Janaki while giving the prize sowed the seed of singing in movies in me by saying that I can shine in the cine world. She encouraged me saying that she too was not a trained singer,” SPB had reminisced at a media meet.

A humble person, SPB had said that if a person achieves something significant in a field, then it is due to the nudges and help rendered by several others. And in his case, there were couple of people.

He had said that but for his friend and roommate Murali who had compelled him to reach the recording studio in 1966 December, he wouldn’t have become a movie singer.

Nearly a week later after his debut, he recorded his first Kannada song for the movie Nakkare Ade Swarga in 1967.

Looking back, SPB in an interview said that his evolution as a playback singer was largely due to Telugu music director Sathyam.

It was the Telugu movie Sankarabharanam that made the nation turn towards SPB. The movie directed by K. Viswanath and the music scored by K.V.Mahadevan turned out to be a big hit.

As the movie was stopped midway, no music company had bought the rights and made the gramophone recording.

At a media meet SPB had said he was grateful to MGR for postponing the shooting for “Aayiram Nilavae Vaa” by a month so that the song was ready.

The singer said he was then down with fever. Given his stature MGR could have recorded the song with a different singer and gone ahead with the shooting.

“I had asked MGR about that later. He said after the audition, I would have told my friends that I will be singing for MGR. And if I was replaced the talk would be that MGR didn’t like my voice and so he chose some other singer. That would have been a big setback for my Tamil movie career, which he (MGR) didn’t want to happen,” SPB recalled the incident.

After that there was no looking back for him. In the Tamil movie world, he had sung for MGR, Sivaji Ganesan, Gemini Ganesan, Kamal Haasan, Rajinikanth and others.

At one point he was so prolific that he recorded over 15 songs in a day.

The 1980s saw the trio – Illaiyaraaja, SPB and S. Janaki- recording a large number of songs and most of them became great hits.

It is a different matter that Illaiyaraaja and SPB had some difference of opinion on the royalty issue. As per law Illaiyaraaja had demanded that SPB pay him royalty for singing his songs on stage performances. The two patched up soon.

It was in 1981that SPB made his debut in the Hindi movie world singing for Kamal Haasan in “Ek Duuje Ke Liye” and went on to sing in movies like “Maine Pyar Kiya”, “Hum Aapke Hain Kaun” and others.

“It was K.Balachander, Director, Ek Duuje Ke Liye who had insisted that I should sing for Kamal Haasan though the music composers Laxmikant-Pyarelal were bit reluctant to try me out,” SPB reminisced.

It is a different matter SPB got National Award for one of the songs in that movie.

During 1990s the list of music directors he worked with increased like Deva, S.A.Rajkumar, Vidyasagar and A.R.Rahman in the hit movie Roja.

Apart from singing, SPB has also dubbed for several leading artists in Tamil and Telugu movies. For Kamal Haasan he was the default voice in Telugu movies. He had dubbed for Ben Kingsley in the Telugu dubbing of English movie Gandhi.

As an actor too, SPB made a mark in jovial father character.

Condolences kept pouring in from film and music personalities all through Friday.

Shah Rukh Khan tweeted: “Condolences to SP Balasubrahmanyam sir’s family and friends on the loss. May the legendary singer’s soul Rest In Peace… Will miss his soothing voice.”

Aamir Khan posted: “Deeply saddened to hear of the demise of Shri S P Balasubrahmanyam. My heartfelt condolences to the family. We have lost one of the most talented artistes of our times. Rest in Peace sir.”

Madhuri Dixit expressed: “End of an era… Your voice will always remain in our hearts #SPBalasubraniam ji. The way you weaved magic with your music is umatched. Rest in peace & my heartfelt condolences to the family in grief.”

Adnan Sami wrote: “Extremely saddened by the news of the passing away of Balasubramanium ji. I cannot imagine my past without his legendary voice being an integral part of the soundtrack of my life… He was an institution of music. May his soul rest in peace..#RIPSPB #SPBalasubramaniam”

Lyricist Prasoon Joshi shared: “A huge loss for the music world. His voice resonated emotionally. It will echo forever ….After our work during the lockdown was looking forward to more collaborations. Will cherish the memories dearly. #SPBalasubramaniam #RIPSPB.”

Telugu superstar Chiranjeevi shared a note that reads: “Darkest day for the world of music. With the passing of the unparalleled musical genius of Shri SP Bala Garu, an era has come to end. Personally, I owe my success greatly to Bala Garu’s voice, through the numerous memorable songs he had song for me. When the world of music wondered who could succeed the legendary Ghantasala Garu, there came one of the brightest stars into the musical galaxy in the form of Shri SPB. His melodious voice transcended linguistic, cultural boundaries and enchanted audience across India alike for decades. There can never be another SPB, only he must be reborn and fill his vacuum! Devastated at his loss! Rest in peace Balu Garu.”

Music composer Salim Merchant posted: “SPB sir’s passing away is such a massive loss to the music world. A singer who sang in multiple languages & made it look so easy. A wonderful human being who’s loved all over the world will be missed deeply #SPbalasubramanyam #SPBalasubraniam.”

Shilpa Shetty tweeted: “Rest in peace, Bala Sir. Your illustrious career of over five decades will be a legacy that generations to come will know of and cherish. Heartfelt condolences to the entire family, praying for peace and strength in these tough times. #SPBalasubrahmanyam #RIPSPB”

Farhan Akhtar posted: “RIP #SPBalasubrahmanyam sir. Thank you for the years of creating magic with your memorable singing. Deepest condolences to the family.”

Filmmaker Ram Gopal Varma shared: “The point is not about living, but it is about what the person contributed to other people’s lives when he was living ..The physical entity of #SPBalasubrahmanyam ended, but his voice will live as long as music lives.”

Comedian Johny Lever expressed: “Very sad to hear about the demise of the legend Shri #SPBalasubramaniam Garu…It’s a huge loss to not just the film fraternity but also our nation. Our prayers and condolences to the family. May his soul rest in peace…#RIPSPB.”

Dia Mirza tweeted: “Terribly sad to hear of the demise of our legendary singer S P Balasubrahmaniam ji. His contribution to society, his passion and songs will live on forever. Deepest condolences to his family. #RIPSPB.”

Sonali Bendre shared: “Your soulful voice will stay with us forever through all your songs #SPBalasubrahmanyam ji. My heartfelt condolences and strength to the family.
Rest in peace sir.”

Bengali film superstar Prosenjit Chatterjee wrote: “Today we lost legend SP Balasubrahmanyam, one of India’s most melodious voices. Every music lovers delight, his voice will echo in our hearts forever. May his soul rest in peace.”