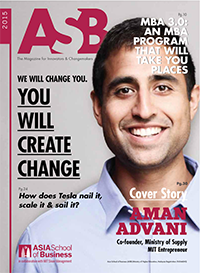 While graduating at the Sloan School of the Massachusetts Institute of Technology in 2010 – which he joined after consulting with Deloitte – he co-founded Ministry of Supply, a clothing brand which seeks to reinvent business wear to include the benefits of athletic gear, said Span Magazine in a feature.

“As an engineer, you’re taught to tinker, which has always been natural to me. With dress socks, in particular, the solution was simple,” he said in the interview to Jason Chiang in Span.

He said he took his favorite Nike socks, sewed them inside the dress he wore to work. “With my mom’s help on the sewing machine, I had an easy route to testing and proving that a simple mash-up was better than the incumbent.”

Advani, who is the chief executive of the brand, met the co-founders of the company at MIT.

“We were introduced to each other since we stood out from the rest of the start-up crowd. There aren’t too many fashion entrepreneurs at MIT. We all saw a near identical picture of a brand that stood for so much more than a mixture of technology and style.”

Elaborating about the history behind the name of the company, which would remind people of James Bond movies, Advani said: “We love our name’s story. It represents the “empathetic inventor;” where Q, from the James Bond films, gets Bond ready for anything while always looking sharp.

“Much like Q-whose character is actually based on a real person in the early 1900s’ British government, operating under the cover, “Ministry of Supply”-we’re in the labs making sure that our customer looks sharp and feels ready for anything.”

“As the lines between work, play, and downtime continue to blur, we need essential garments that keep up with our entire day.”

“We’ve set out to achieve that versatility through capable garments that actually fit the human body and are easy to care for and wear, no matter what you choose to do in them,” the company website said.

The company this year plans to expand its reach through products, channels and even some in-house manufacturing, he added.