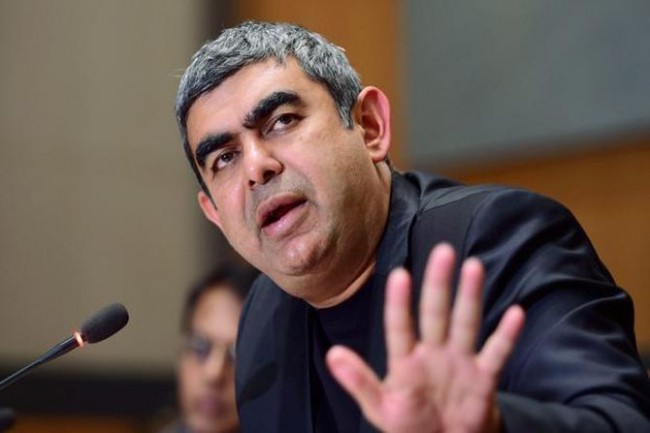 His resignation was accepted, and he was appointed Executive Vice-Chairman till the new CEO and MD takes over by March 31, 2018.

In a related development, the Board elevated Chief Operating Officer U.B. Pravin Rao as the interim CEO and MD, reporting to Sikka under its overall supervision and control.

“Sikka will continue to focus on strategic initiatives, key customer relationships and technology development. He will report to the Board,” the IT major said in a statement.

Reiterating his belief in Infosys’ great potential, Sikka, 50, cited continuous distractions and disruptions and personal and negative remarks against him as reasons, and said they were preventing his ability to accelerate the company’s transformation.

“The Board thanks Sikka for his leadership and contributions during a period of rapid evolution in this industry,” said the company statement.

“The Board understands and acknowledges Sikka’s reasons for resigning and regrets his decision. The Board is also distressed by the personal attacks on the members of the management team made in the anonymous letters and which surfaced in recent months,” the statement pointed out.

The company’s other co-founders, including N.R Narayana Murthy, Nandan Nilekani and S. Gopalakrishnan held the executive post for over three decades successively.

Sikka will receive $1 (Rs 64) as annual salary during his tenure as Vice Chairman. Any equity awards held by him that remain outstanding and unvested shall continue to vest (and, in the case of stock options, become exercisable) in accordance with their terms.

The Board denounced the critics who had amplified and sought to further promote demonstrably false allegations which have harmed employee morale and contributed to the loss of the company’s valued CEO.

The Board has mandated the Chairman and the Nomination and Remuneration Committee to identify and select a permanent CEO and Managing Director.

The Board appreciated Sikka’s commitment to facilitate a smooth transition to new leadership equipped to lead the company and ensure continuity in service to its customers.

When Sikka took over (in August 2014), the company was lagging behind the industry growth. During his tenure, revenue grew to $2.65 billion in the first quarter of this fiscal (2017-18) from $2.13 billion in the same period of fiscal 2014-15, with strong margin performance and cash generation.

“Sikka’s approach to profitable growth delivered increase in liquid assets, including cash and cash equivalents to $6.41 billion in June 2017 from $4.9 billion in June 2014, while paying dividends of Rs 19,000 crore over the past three years,” recalled the Board.

Under Sikka’s leadership, the company launched new programmes to drive innovation, education and entrepreneurship on a large scale.

“Employee attrition has decreased during Sikka’s tenure, particularly among high performers, utilisation is at a 10-year high and client satisfaction at an all-time high,” claimed the statement.

The company launched 25 new services which rose to 8.3 per cent of revenue last quarter from zero per cent in April 2015.

Sikka has also been a thought leader and visionary in Artificial Intelligence (AI) technology, recognising early on the unprecedented value the company could deliver through automation and AI-led innovation in clients’ businesses.

“Under his leadership, the company developed and launched its AI platform Nia and has 160 AI scenarios deployed with 70 clients. We also ventured into design-thinking with clients and start-up investment fund,” the statement said.

Lauding Sikka, Board Chairman R. Seshasayee said the ace technocrat would be remembered for infusing a refreshed sense of direction, purpose and energy in the organisation.

Board Co-Chairman Ravi Venkatesan also thanked Sikka for his commitment to ensure a smooth transition and using his experience for the company’s global clients.

“I started my journey as the CEO of this iconic company with a mission to transform it on the basis of software, especially Artificial Intelligence (AI) and innovation, enabled by education,” said the statement, quoting Sikka.

“Three years later, I feel proud of our progress and achievements, from profitable revenue growth to purposeful adoption of software, new services and grassroots innovation, to the recognition from our clients worldwide,” added Sikka.

With Gopinath as IMF chief economist, 4 women now at apex of world economy