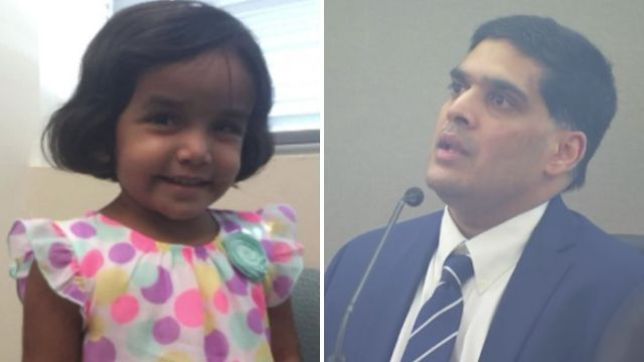 Washington, July 19 (IANS) Wesley Mathews, the Indian-American father who was sentenced to life in prison over the killing of his three-year-old adopted daughter Sherin Mathews in Texas, has requested a new trial.

The man was sentenced on June 26 over his daughter’s death in October 2017 after pleading guilty to a lesser charge of injury to a child by omission. He was also accused of hiding his daughter’s body in a ditch in Richardson under a road about one kilometre from their home in suburban Dallas.

Authorities had originally charged him for capital murder.

However, in a court motion filed this week, attorneys for Wesley Mathews, 39, requested a new trial, arguing that evidence presented against him was “prejudicial”, the Dallas Morning News reported.

Mathews’ attorneys argue that he deserves a new trial in part because prosecutors showed the jury a photo of Sherin Mathews’s decomposed body. “The picture was prejudicial and prevented Mathews from getting a fair trial”, the man’s lawyers say.

On October 22, 208, Sherin Mathews’ body was found in the culvert in Richardson.

In June 2019, he avoided a full-fledged trial by pleading guilty to the lesser charge of causing a felony injury to a child. That time he told the jury how much he regretted dumping the 3-year-old’s body in a culvert and said he would be “more than happy” to accept life in prison if the jury decided so.

During his trial, Wesley Mathews had claimed he had prayed over his adopted daughter’s body in the hope that she would be raised from the dead like Jesus Christ raised Lazarus in the Bible.

Wesley Mathews’ wife Sini was also charged with child abandonment but her case was dismissed earlier this year due to lack of evidence.

Indian-American woman killed after being dragged by truck