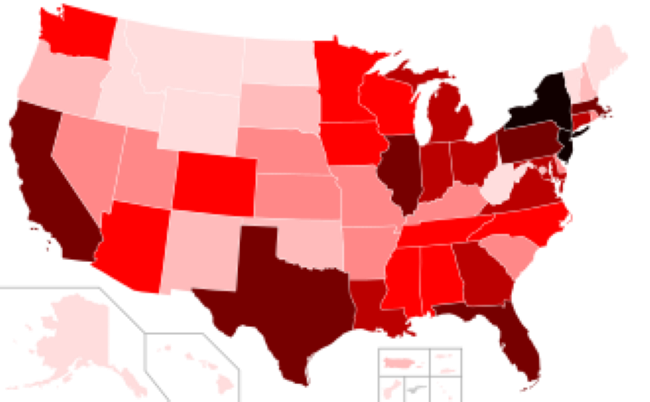 Washington, June 18 (IANS) Several US states have hit record highs for new COVID-19 cases in recent days, raising fears of a new wave of the virus.

That trend continued in some states on Wednesday.

Oklahoma registered another record for single-day new cases, and California set another record in its rolling average, while North Carolina’s average dropped by one case, breaking a streak of 15 new highs in a row.

With 2,162,851 cases and 117,713 deaths, the US continues with the world’s highest number of COVID-19 infections and fatalities, according to the Johns Hopkins University.

An influential COVID-19 model produced by the Institute for Health Metrics and Evaluation (IHME) at the University of Washington has revised its projections, forecasting nearly 170,000 COVID-19 deaths in the US by October 1.

As all 50 states moved to relax restrictions, hot spots have emerged in South Carolina and Missouri and cities such as Houston and Phoenix.

Week-over-week case counts were on the rise in half of all states, according to a report by The Hill.

Meanwhile, infections have dwindled in other states that were initially hit harder.

The reopening of businesses nationwide and planned school resumption are drawing growing concerns for a new wave of infections.

“There are blueprints that will allow businesses and schools to open safely. If they follow these blueprints it will be possible to operate safely,” Robert Schooley, a professor of medicine with the Division of Infectious Diseases and Global Public Health at the University of California, San Diego, told Xinhua on Wednesday.

He said in some places in the country, it is likely that businesses will do very well, butut in others, where public health measures are not taken seriously, the population will be at a “significantly increased risk” for a resurgence of the disease.

According to Stanley Perlman, a professor of microbiology and immunology at the University of Iowa, the country might not see a “turning point” for a year.