A festive mood, euphoria and excitement marked the event which was attended by over 100 Indian-Americans including dignitaries and representatives of many diverse organizations. 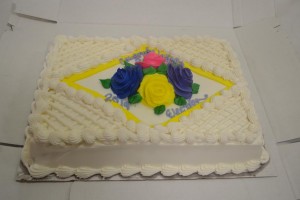 Welcoming the audience under the banner of Global Indians for Bharat Vikas (GIBV), an NGO launched in July 2013, Dhiru Shah, who emceed the program, conveyed the community’s best wishes to Narendra Modi, the BJP and the people of India for the historic and epoch making 2014 election victory. He noted that the objective of GIBV: NRIs globally, a potent force, can help the new government lead by Modi in reshaping the future of Bharat through economic and social development by setting up new industries in small/medium/large scale in India, providing technical knowhow, and furthering trade and business between India and the rest of the world including USA. Shah urged the audience to work proactively to help Modi’s economic and social agenda with whatever talents and strengths they have. He mentioned that the immediate task of Modi will be to work on such projects and programs which can help reduce poverty and provide water, electricity, sanitation, health care and basic infrastructure like roads, primary education in the shortest possible time. 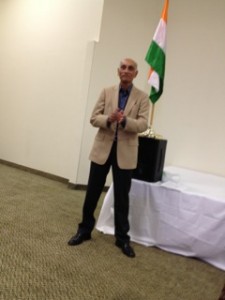 He also urged the audience to donate funds to Congresswoman Tulsi Gabbard for her forthcoming election in Nov. 2014. She has criticized the House Resolution introduced in the Congress recently by a few Congressmen against Modi. She is the only Hindu Congresswoman to speak on behalf of Hindus and India and hence the request for election donation for her campaign, he said.

Sneha Mehta, past President of VHPA, and a social activist known for her commendable selfless humanitarian  role in the community described her recent experiencse in India, where she spent about three months with the GIBV team campaigning for Modi and BJP in various parts of Gujarat, Maharashtra, Rajasthan and U.P. At times, they even traveled with Narendra Modi’s brother Sombhai.  She urged the members of the audience to help Modi to fulfill his economic and social development agenda. 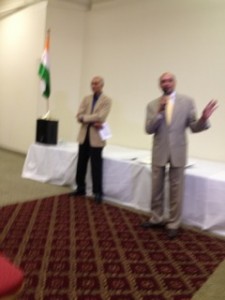 Ekal Vidyalaya, S.E.Region President, Global Mall owner, event host and philanthropist Shiv Aggarwal lauded Narendra Modi and BJP for the landslide victory. He also asked the audience to help Modi fulfill his goals and objectives. He stressed the need for unity among the Indian community, and urged all organizations to unite for common objectives.

The Gandhi Foundation of USA Chairman and recipient of the prestigious Pravasi Bharatiya Samman Award and Elis Island Award, and national leader Subash Razdan asked the audience in moving forward in helping the new government in India and to avoid any negative blame game against opponents. He suggested that NRIs have to get involved in political participation in America which can help the new government establish mutually beneficial relationship between the two countries.  “Narendra Modi is the right man at the right time. I feel proud of him and I wish him all the best,” he said.

In his very eloquent and articulate remarks, Past President of IACA, American India Foundation, Atlanta Chapter’s Chairman, well known stage actor and poet Amitabh Sharma recounted his recent 2014 election campaign experiences as a BJP volunteer. He spent about two and half months in Uttar Pradesh and talked to a lot of voters to vote for Modi and the BJP/Lotus. Amitabh exhorted the gathering: “There are three million Indian-Americans in the USA. We are a powerful force to reckon with. We must strive for a unified voice.”

Sharma also informed the audience about the proposed Delhi-Mumbai Industrial Corridor project and its importance for the whole of India.

Radhika Suda, representing Seva and Hindu Swayamsevak Sangh USA narrated how thousands of dedicated and indefatigable Sangh volunteers worked behind the scenes to campaign and manage the 2014 election campaign of Modi and the BJP in India. She informed how Sangh Shakhas work and contribute in inculcating the Hindu values in the young Hindus. She urged the audience to help in setting up three more HSS shakhas in Atlanta.

Atlanta’s well-known and respected hotelier and past Chairman of Asian American Hotel Owners Association, Chandrakant (CK) Patel said he felt immense joy at the unprecedented victory of Narendra Modi and the BJP party. He implored the audience to be proud of their Indian roots and also be thankful to not only India (Motherland) but also the U.S. (Fatherland). While India has given us sanskars, the U.S. has given us opportunities to improve our standard of living and also to progress in our chosen professions. He too stressed unity amongst the NRIs and various organizations and emphasized the need to play a more proactive role in American politics. “Tulsi Gabbard is the first Hindu-American elected to the U.S. Congress. She ought to be commended for her candid and critical comments in the Congress about the timing and motive of the hearing of the Tom Lantos Human Rights Commission (TLHRC) on the plight of religious minorities in India aimed at Modi. She had said that such hearing in the Congress is tantamount to interference in the internal affairs of India which must be condemned by all Americans,” he said. Chandrakant Patel, like Dhiru Shah appealed to the gathering to give strong financial support to help her get re-elected in the upcoming November 2014 elections.

All were treated to delicious snacks, including ladoos and other sweets, and tea.

Consulate briefs media about steps taken for normalcy in Kashmir, plans to boost its economy