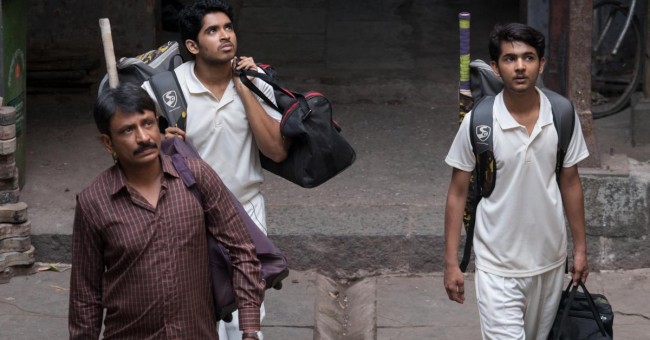 The actual sacred game in India is cricket. To generate a drama of disenchantment in the cricketing field is relatively easy. What director Udayan Prasad (best remembered for the Om Puri-starrer “My Son The Fanatic”) has done is to make the cricket ground a place for meditation on socio-cultural displacement.

Much of the series’ meat and juice come from its source material, the novel by Aravind Adiga. This is the epic story of the migratory translocation of two young boys Radha(Yash Dholye) and Manju (Mohammad Samad) aged 15 and 16 from rural Maharashtra whose tyrannical trashy father drags them to Mumbai for a life of cricket.

Udayan Prasad and his writers (Marston Bloom, Karan Aggarwal and Sumit Arora) have dug deep into the class differences at the turf level.

There is a remarkably subtle homo-erotic attraction that grows between Manju and an upperclass Muslim boy Javed (Karanvir Malhotra). That young Samad happens to be an actor of phenomenal sensitivity helps give the content a quicksilver immediacy and warmth. Converging gently on Samad, the series becomes the saga of Manju’s journey from patriarchal tyranny to sexual and spiritual freedom.

The series is bankably buoyant and breezy without trivializing the issues that concern the theme such as a young mind’s right to follow its own dream. There is a subplot about an over-ambitious realtor (Akshay Oberoi) trying to get a wily wizened but impish real-esate owner (Ratna Pathak Shah) to part with her property. Akshay and Ratna play against each other with a flirtatious malevolence bringing to the table the mood of tragic travesty that has overtaken the metropolitan psyche.

Ratna Pathak Shah, Mahesh Manjrekar (as an ageing cricket coach who rediscovers his mojo), Rajesh are brilliantly in form. Akshay brings a subtle sliminess to his suave wheeler-dealer’s role. Here is an actor who deserves to be on top of the game. Sacred or otherwise.

And I was delighted to see the accomplished Geetanjali Kulkarni (last seen as a prosecutor cutting vegetables on the train back home from court for the family dinner in the Marathi film “Court”) playing Mahesh Manjrekar’s ailing but smiling wife.

But it is Samad whose performance anchors the series. He plays the reluctant cricketer with a just the right amount of angst and assuredness. My favourite sequence in the series is the one where the principal of the school Ratna Pathak Shah punishes Samad by banning him from playing cricket for a week.

“But that’s not a punishment,” smiles Samad with such understated relevance, it shows we are looking at an actor with a very bright future. Ditto the series.

Brimming with an all-knowing wisdom that never grows cocky, “Selection Day” has me hooked. I can’t wait for Season 2.

Don’t think I’ll ever let myself feel like a star: Q & A with Sara Ali Khan

This 'superfood' can relax your arteries, lower blood pressure