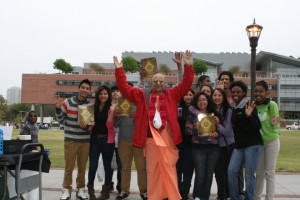 Atlanta,GA: Earth Day is an annual event, celebrated on April 22nd in more than 192 countries, on which day events worldwide are held to demonstrate support for environmental protection.

As the world’s population migrates to cities, and as the bleak reality of climate change becomes increasingly clear, the need to create sustainable communities is more important than ever. Typical ways of observing Earth Day include planting trees, picking up roadside trash, conducting various programs for recycling and conservation, using recyclable containers for snacks and lunches, call for stronger or immediate action to stop global warming and to reverse environmental destruction and so on.

Among the many exhibitors, GVA focused on vegetarianism, cruelty against animals or non-violence, why the earth is called the Mother Earth, the material creation from the five basic matter found in nature, namely earth, water, fire, air and ether, the presence of soul in all living beings including animals and birds, the transmigration of soul from one body to another thereby stressing the point that the progression of soul should not be stopped by animal killing, quotations from the age old Vedas depicting the importance of protecting Mother Nature, and quotes of great Acharyas and prominent scientists through posters and banners in their exhibit. GVA distributed many books, CDs, DVDs, and magazines to all the attendees.

Shrila Maharaj visited all the exhibits at the event, discussed the various ideas through which we can be environmentally conscious in our day to day activities by being spiritual and gave his blessings in appreciation. A foremost speaker of Bhakti Yoga and preacher of Vedic scriptures, Shrila Maharaj has authored many classic books and has been invited to a number of leading Universities and Colleges around the world for his authority, depth and clarity in the ancient Vedic scriptures visited Atlanta in April/May 2014 for the annual ‘Spirituality in Spring’ lecture series.

Science gives a limited picture of reality. The world scriptures reveal the spiritual aspect of reality, including God. God primarily reveals Himself through scriptures known as the Vedas, which contain a vast amount of knowledge about God and reality. Among them, the Shrimad Bhagavatam and Shrimad Bhagavad Gita provide the most focused explanation of God and reality. Shrila Maharaj gave discourses from the most esteemed literature, the Shrimad Bhagavatam everyday between April 19th and May 2nd in Cumming and Alpharetta. Shrila Maharaj spoke from the third Canto giving detailed explanations on the fundamental principles and understanding of the material nature, the glories of devotional service and explanation of devotional service by Lord Shri Kapila Deva, an incarnation of the Supreme Lord Shri Vishnu. Lord instructed the Sankya philosophy to His mother, Devahuti on her uncontaminated desire for transcendental realization. Shrila Maharaj explained the purports to this philosophy with many examples.Krishnaprasadam was served everyday after the morning and evening programs.

Shrila Maharaj traveled toHouston,Pennsylvania,New Jersey, andOttawa,Canadaas part of Gaudiya Vaishnava Association’s ‘Spirituality in Spring’ program. On April 15th, at the prestigiousUniversityofPennsylvania, one of the Ivy Leagues he delivered an enlightening lecture on “Science & Spirituality”. His transcendental teachings elevate the listeners to a far superior position where they can experience real peace and happiness.

These treasures come in the form of his books, CDs and DVDs in English, Hindi, Tamil and Bengali. Please call 1-888-9GVA-USA or email at -usa@bhagavatvani.org for all your spiritual needs.