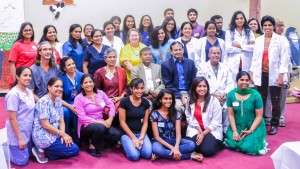 Atlanta,GA: Georgia Indian Nurses Association, in coordination with Sai Health Fair, hosted a health fair at the Atlanta Christian Assembly Building 3 inDecatur,Georgia, on Saturday, June 21, 2014. The 32nd Sai Health Fair elicited a very good response with an attendance of over 350   participants. The exemplary SAI Health Fair was spearheaded by well-known physician, Dr. Sujatha Reddy and was organized as a tribute to the life and legacy of Mahatma Gandhi and also to promote his and Dr. Martin Luther King’s philosophies of Non-violence, community service and Social justice. The event was also sponsored and strongly supported by Sangisetti Charitable Foundation,  physicians, health care professionals and volunteers.

People of diverse nationalities and cultures from all overAtlanta availed themselves of the free consultancy and tests services provided by over 22 dedicated physicians representing 13 specialties, supported by over 30 nurses and technicians and 25 service-oriented volunteers. 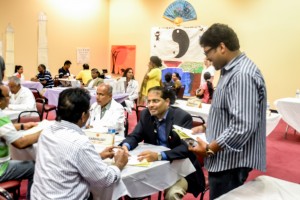 Over 150 EKGs were carried out by  Gwinnett Heart Specialists and  Commerce Cardiology Group,Commerce, GA. Emory University School of Medicine, carried out over 65 Glacoma screening tests of which eight were referred for glaucoma follow up. Michael Rothschild, who is a 4th year student and also President of the Ophthalmology Interest Group commented,” We are providing free glaucoma screening to members of the community. This is really important thing for us to be doing because glaucoma is the number one preventable cause of blindness in theU.S.and it is easily prevented. All it takes is the knowledge and positive screening to prevent blindness.”

Thirty five audio screenings (10 found to be abnormal) were done by Dr. Sridhar Krishnamurthy fromAuburnUniversity, Alabama.More than 40 bone-mineral–density tests, were performed by a team of Madhusudhana Reddy , Vasantha Bandari, Janet James, and Jolly Vinomon. 60% were found to be abnormal.

Over 150 cost –effective, basic quality comprehensive Chemistry profile of blood tests with PSA, and HBA1c were carried out at a nominal fee of $25 per test. The lab work was provided by American Clinical Labs. Inc.in Stone Mountain.

Stroke Risk Factor Education was provided by Joshua Dunn and Lovely Shine fromEmoryStrokeCenter. Many were given  nutrition tips at the booth manned by nutrition dieticians Girish and Manju Patwardhan and Bhumi Patel.

Dr.Todd Gibson, an Atlanta Chiropractor and yoga practitioner rendered chiropractic care to 16 patients who had active migraine, active frozen shoulder, limited spinal range of motion, vertigo, sinus congestion, and other health problems. “As a health care provider and doctor myself, it has become known in the field that doctors and nurses of Indian heritage can have a greater mastery of the holistic aspects of health care as a rule, because of the nature of the cultural heritage and legacy, and great examples of compassionate soul,” he said. My heartfelt thanks to Dr. Sujatha Reddy for leading by her example, embodying the qualities of Gandhi and Dr. Martin Luther King across the barriers of race, creed, caste, class, social status, or income. She is truly an inspiration to everyone concerned.”

Dr.Saleem Boghani said that he was pleased to see that many who came to him for ultrasound screening of carotid artery and abdominal aorta  for atherosclerotic disease, were having this scan done for the first time.

Snacks, fruits and drinks were provided to all the participants byCharterAnchorHospital. GINA provided delicious lunch to all the doctors, technicians and volunteers.

GINA’s President Mary Jose lauded Dr. Reddy and said, “This was GINA’s first Health Fair and the best community services of the year 2014 in coordination with SAI Health fair. It was a great success. There were more than 350 community members who benefited from this fair including the uninsured, under insured and the poor.  We strive for uniting all Indian nurses and nursing students of Georgia under the umbrella of NAINA .(National Association of Indian Nurses of America), and to spur our excellence in nursing practice in health care through the empowerment and renewal of professional and cultural identity of all nurse of Indian origin/heritage and  to optimize their contribution to individuals, families and communities.”

Science & Spirituality for Conservation of Resources during Earth Day