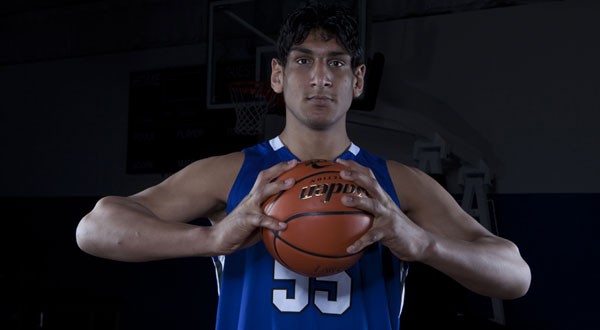 He is hoping to become the first India-born player in NBA. Gursimran “Sim” Bhullar became the first player of Indian origin to play in the NBA when he turned out for the Kings in three games in April, reports Xinhua.

Scouts at Sacramento Kings, who conducted a successful pre-draft workout with Satnam on Thursday, see the glimpses of Chinese legend Yao Ming in the Indian youngster. Ming is a retired Chinese professional basketball player who played for Houston Rockets, becoming the first Chinese player to play in NBA.

In their second pre-draft workout, the Kings had their focus mainly on the post guards. The Indian centre towered above the other two – California’s David Kravish and Stefan Nastic of Stanford. All the three NBA hopefuls were put through a series of drills to test their ability to play the post.

Hoping to become the first Indian-born hoopster to play in the NBA, Satnam looked agile under the glass and was shooting the ball well to appear as the prime candidate for the Kings. Whether he makes it to the team immediately or has to wait, the 19-year-old is fully aware of the pressure that comes with being the most promising NBA prospect from India.

“The pressure is really a lot on both my shoulders. One shoulder is my family and the other is India. I am here because of India. My coaches, family, friends and fans back home always motivate me to do something great here,” Satnam said on Sunday.

The Kings owner, Indian businessman Vivek Ranadive too was present during the workout.

“How are you feeling over here and asked me whether I would like to do a summer camp. I immediately said, ‘Yes, I would love it’,” Satnam said of his first meeting with Ranadive.

The Kings’ Indian connection will be handy for Satnam, who comes from a small village named Ballo Ke, in the Barnala district of Punjab. Since taking over as the principal owner of the Kings, Ranadive has been vocal about his desire to make the team a global brand, particularly in India.

In April, the team signed 7’5 Sim Bhullar, who became the first player of Indian origin to play in the NBA. Canada-born Bhullar played in three games for the Kings and was released after his 10-day contract.

Realistically, it’s far way to go for Indians to see their giants reach Yao Ming’s height on court in NBA. Bhullar’s performance is less persuasive for any NBA team to offer a long-term contract.

Bhamara does not seem to have much chance to be drafted in the NBA this year, but he plans to turn professional after not qualifying for a college scholarship. In the long run, India can expect to see their “Yao Ming” thanks to a batch of favourable conditions — India’s market, the Kings’ Indian background and Bhamara’s potential.

Bhamara can be considered as a favoured NBA draft pick next year if he can’t make it this year. Kings’ former interim head coach, Kenny Natt, who has been working with Satnam has said: “I have been in the league and know how guys like Satnam are looked upon. He has size, strength and touch. He has good hands and can run the floor. Those are the types of things that NBA teams value.”

NBA league welcomes another heavyweight Asian player after the retirement of Yao Ming, who had made a huge impact both on and off the court. NBA had been experiencing its influence expanding along with Yao Ming’s presence in the league.

A NBA star from the world’s second most populous country will do a world of good for the league.