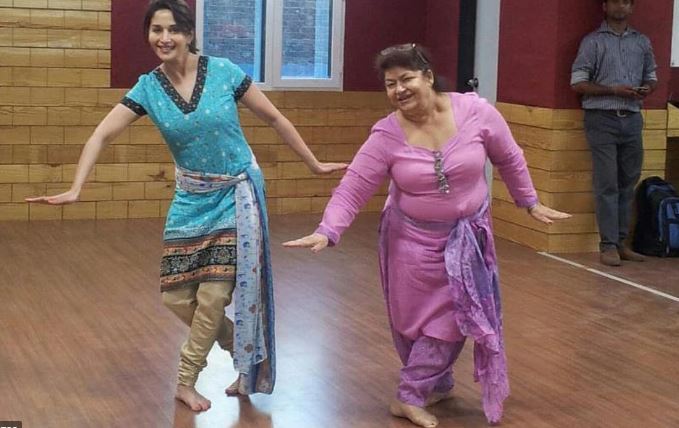 Mumbai, July 3 (IANS): Bollywood choreographer Saroj Khan passed away in the early hours of Friday, but she will continue to live on through her art.

It is not easy to define a dance diva who constantly redefined Bollywood dancing over nearly four decades through a list of her greatest dances, but IANS gives it a shot here:*

The dance made Madhuri Dixit an overnight star, catapulting her into the A-list of Bollywood actresses of the era. Madhuri came into “Tezaab” with a few forgettable films like “Abodh” and “Hifazat” behind her, and Saroj Khan gave her the steps to walk right into the path of glory with this song in the Anil Kapoor co-starrer directed by N. Chandra. A reworked version of the song was filmed on Jacqueline Fernandez for the 2018 film “Baaghi 2″, but Khan had openly said she wasn”t too impressed with the effort.

The song was one of the biggest chartbusters of the 1980s, and still remains one. The dance became evergreen thanks to Sridevi”s lively body language and comic execution of Saroj Khan”s spirited choreography. It also gave Sridevi the moniker of ”Hawa Hawai” girl.

Harmesh Malhotra”s “Nagina” opened as a modestly-mounted film without much hype and went onto create a few records in its time. The film made Sridevi a superstar and the trade acknowledged she was one actress of the era who could run a film on her own. A big part of the film”s success owes itself to the highlight dance number in the climax featuring Sridevi as the snake-woman, and belting out the snake dance choreographed by Khan, which continues to be popular.

The song, filmed on Sridevi, is still regarded one of the most sensuous numbers in Bollywood. Saroj didn”t only treat it as a dance number, but made Sridevi use her body and eyes to express a gamut of emotions. Also, this was the song that first made the chiffon sari a work of pop sensuous art on the Bollywood screen.

Picturised on late Sridevi, the song still has a special place in people”s hearts, because of the simple yet expressive dance steps by Saroj Khan. Decades later, it continues tobe one of the most popular ”shaadi” songs in our pop culture.

The peppy song featuring Madhuri Dixit and Sanjay Dutt was choreographed by Saroj. The song is exceptional because Khan, widely acclaimed for her Indian dances, stepped out of her confort zone to try something abosolutely westernised as the breakdance. The dance became one of the biggest hits of its time, and has lately been recreated in Varun Dhawan and Alia Bhatt”s film “Badrinath Ki Dulhania”.

Saroj Khan experimented the most with Madhuri Dixit, more than any other heroine. In this song from an otherwise forgettable film, Khan imbibed the West Indian fishing community”s folk dance steps for Madhuri, and she literally set the stage afire.

For many, Madhuri Dixit is Bollywood”s ”Dhak Dhak” girl. And Saroj Khan was the woman behind the iconic steps of the song, which has stayed with the actress till date. The song was shot in just three days instead of the originally planned six-day schedule.

The song features Kajol burning the dancefloor with Shah Rukh Khan. Saroj Khan had once shared that she loved the fun song so much that she cleared her busy schedule to make time for it.

The song featuring Madhuri Dixit continues to be popular, mainly because of its naughty, suggestive steps meant to compliment the lyrics. Khan infused the number with energy and mischievous spunk through the steps, duly brought alive by Madhuri.

Another trademark Madhuri Dixit number choreographed by Saroj Khan. The song is a mix of traditional dancing and contemporary Western dance moves, which reflects celebratory emotions.

The song is a dazzling example of traditional folk imbibed to create a popular dance number. Filmed on Aishwarya Rai, the mood suitably alternates between the mischevous and the innocent.

Saroj Khan used her dance moves to emote the rustic and evocative melody of AR Rahman to create a visual masterpiece. The steps express the feeling of envy with perfection.

The song featuring Madhuri Dixit and Aishwarya Rai Bachchan was one of the most talked-about aspects of the Sanjay Leela Bhansali directorial. The graceful choreography fetched Saroj Khan her first National Award.

The song is used to introduce the film”s free-spirited female protagonist, played by Aishwarya Rai-Bachchan in the Mani Ratnam film. Khan brought in her magic to use dance steps to express freedom and joy while dancing in rain.

Saroj won her third National Award for choreography for the foot-tapping song, featuring Kareena Kapoor. It was shot in the snowy landscape of Himachal Pradesh, and brought alive a sense of letting oneself go in joyous abandon.

With the song, Saroj Khan reunited with Madhuri Dixit. The song is solely picturized on Madhuri, who plays a courtesan and gets to flaunts some intricate classical dance moves.

Mindy Kaling’s ‘Never Have I Ever’ renewed for second season