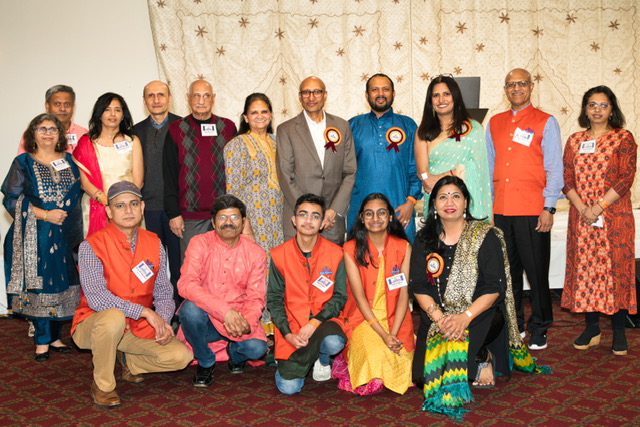 Atlanta, GA, December 16, 2022: “A child without education is like a bird without wings.”—Tibetan proverb

To gift wings to children in rural and tribal communities in India, the Atlanta Ekal Vidyalaya chapter set out on the formidable but humanitarian endeavor to present a dance and music- studded entertainment program, with some of the best artists in Atlanta, at the Global Mall, Norcross, GA on December 2nd.

Selfless service and dedication to the cause enabled ticket sales to exceed expectations, and the attendees and volunteers eagerly anticipated the day of the program, and to warmly welcome over 300 plus audience from across Georgia and neighboring States.

The event began at 7:30 pm after a delicious dinner at the Global Mall Impact Center, with a cheerful welcome from the GA Event Coordinator, Neetu Singh Chauhan, who emceed the show with great verve and enthusiasm.

The show commenced with a mesmerizing Rajasthani Kathak dance admirably choreographed by the Founder and Director of KalashramUSA, Anuraj Sharma ji, a student of Kathak maestro Padma Vibhushan Pandit Birju Maharaj ji. The performance showcased the rich cultural heritage and artforms of one of the Indian classical dances.

It was time for four of Atlanta’s talented and well-known vocalists to regale the audience with a repertoire of ever popular songs. Purnima Mathur, who is an accomplished singer for All India Radio and who has featured in the music talent show SaReGaMaPa and Zee Antakshari, rendered melodious classic medleys, including “Jaane Kya Baat Hai,” and “Aaiye Meherbaan.” Pankaj Bhargav, popularly known as the Kishore Kumar of Atlanta, followed and gave a joyous rendition of “Khilte Hain Gul Yahan,” “Chala Jata Hoon Kisi Ki” and “Hawa ke Saath Saath,” and a romantic Silsila duet’Dekha ek khwab’ with Purnima.

Next on stage, Shyam Gupta, who is an Atlanta Indian Idol finalist, kicked it up a notch with an electrifying attitude to match Rafi songs, “Chhalka yeh Jaam,” “Badan pe sitare,” and “Deewana Hua Badal,” and also a duet from popular movie Abhimaan, “Tere Mere Milan ki Yeh Raina” with Jyotsna Nanu. Jyotsna, a singer, composer and music producer, then treated the audience with her soulful vocals and dexterous techniques of her interpretation of “Mere Dholna Sun” and the heart tugging ghazal pleading “Aaj jaane ki zid na karo,”. It was then the turn of Ajay Upadhyay, the Ekal regional VP, who sang a tuneful “Neele Neele Ambar par” song infused with poetic lyrics.

After some one-liner jokes from emcee Neetu Chauhan and an enlightening presentation on Ekal Vidyalaya Non-Profit Organization by Preeti Tanwar, which highlighted Ekal’s one-teacher school model followed in all the Indian States, from Kashmir to Kerala. For an annual sponsorship of only $365. Ekal has brought literacy and life-enriching opportunities to over 2 million students in one hundred and two thousand schools. Each Ekal school provides basic education to nearly 20-30 students with an almost equal boy-girl ratio. The Ekal program of free basic primary education has been expanded to provide vocational training, social empowerment, and healthcare for adults, resulting in far-reaching changes in neglected villages of India and Nepal. Sponsors can track their school at www.ekal.org, connect with Ekal on Facebook and Twitter or visit an Ekal school as part of the Vana-yatra program.

Atlanta has many hidden gems, and a few talented singers from the audience spiced up the event. Aruna Sharma sang “Ja Re Ja Re Ud Ja Re Panchhi” and Sripriya Srinivas, an Atlanta idol Junior category winner, captivated the audience with her” Beeti na Bitai Raina” song.

The audience was transported to an imaginary Vrindavan through the scintillating, beautifully choreographed Kathak group dance performed by the students of KalashramUSA.

After the heartfelt vote of thanks by President Shiv Aggarwal, Pankaj Bhargava, Shyam Gupta, Purnima Mathur, and Jyotsna Nanu came together for zestful foot-tapping numbers that were irresistible for many in the audience who got up from their seats to dance, earning thunderous applause.

The show was an indubitable success, raising 105 schools at the event. The volunteers and attendees both expressed their resolve and commitment to serve and strive to accomplish even more through and for Ekal Vidyalaya’s Atlanta Chapter.

All in all, it was a well-orchestrated, enthusiastic, engaging, much appreciated and enjoyable program for a very worthy cause!

It’s not too late to submit more college applications: Late admission deadlines for 2022-23