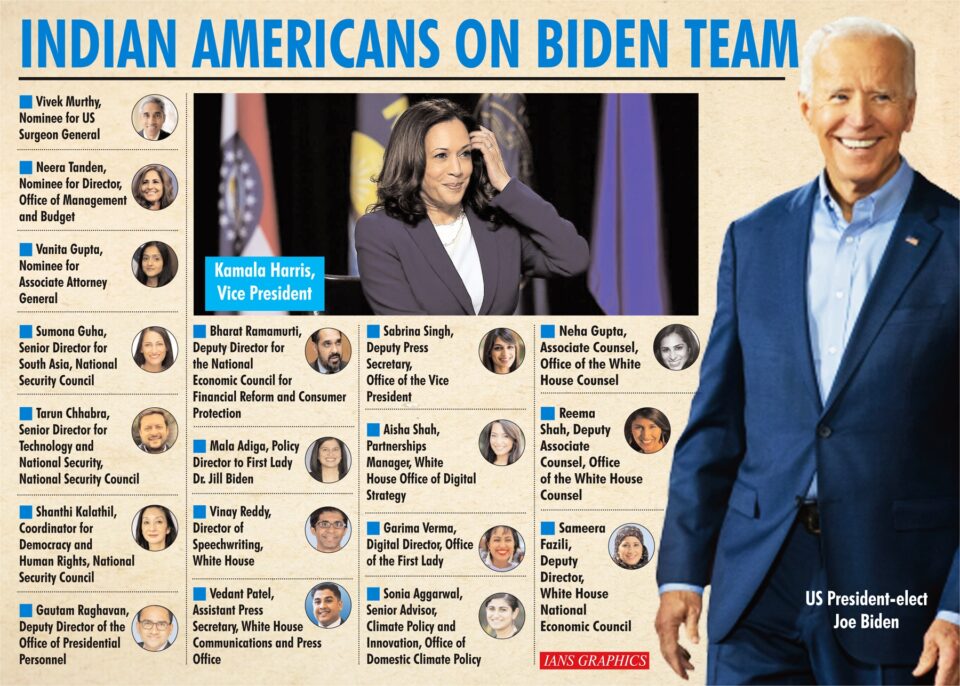 New York, Jan 18 (IANS) Kamala Devi Harris, Vivek Murthy, Gautam Raghavan, Mala Adiga, Vinay Reddy, Bharat Ramamurti, Neera Tanden, Celine Gounder, Atul Gawande are some of the Indian names that are blooming more now than at any other time in the innermost circles of the White House and that too within weeks after the #MyNameIs blowback to Republicans’ mangling of US Vice President-elect Kamala Harris’ first name during the 2020 campaign.

Till date, nearly two dozen Indian-Americans have been appointed or nominated to high powered positions on the Biden-Harris A-team.

“KAH’-mah-lah? Kah-MAH’-lah? Kamala-mala-mala? I don’t know. Whatever,” Republican Senator David Perdue, an ally of outgoing President Donald Trump, mocked as crowds of Trump fans erupted in laughter ahead of a super spreader-type rally in Macon before the November 3, 2020 election.

As Perdue made a spectacle of himself, little did he or Trump know that two dozen Indian names would make it to the who’s who of the 2021 White House or that the blowback to the Senator’s comments would lead to record fundraising in Georgia, a whopping $1.8 million in 48 hours, where two Senate races were still to be decided.

By January 6, the day a violent pro-Trump mob attacked the Capitol building in Washington D.C., Harris’ Democratic party colleagues had won both the Georgia Senate seats, America’s balance of power had been transformed.

When Harris and President-elect Joe Biden take their oaths to lead America, they also herald the arrival to the White House of Indian-American success stories across a wide arc of subject matter expertise including medicine, economics, digital communications and storytelling.

Their Indian-ness is total, it’s for the white Americans to go figure that Murthy is ‘Moor-thee’ and not ‘Mirth-y’, that the second syllable in Gautam is ‘tham’ as in ‘thump’ and not ‘tam’ as in Tim-Tam and so on.

KHarris has spent a lot of time explaining her name to America.

“First, my name is pronounced “comma-la”, like the punctuation mark. It means “lotus flower”. which is a symbol of significance in Indian culture. A lotus grows underwater, its flower rising above the surface while its roots are planted firmly in the river bottom,” she wrote in her memoir, “The Truths We Hold”.

During the campaign, that became a GIF, a video, a meme and every kind of cultural insert on the internet.

When Shyamala Gopalan Harris chose to name her first born Kamala, it was intentional and carefully thought through.

“A culture that worships goddesses produces strong women,” she explained to the Los Angeles Times in 2004, when Kamala Harris was 40.

Kamala is one of the 108 names of Goddess Lakshmi, bestower of wealth, prosperity and fortune in Hindu culture.

In a recent conversation with IANS, political science professor and founder of AAPI Data Karthick Ramakrishnan pointed to the “very particular Tamil Brahmin experience” that Kamala Harris emerges from.

“But what was interesting was that she was not trying to pander, to speak about some kind of generic Indian-American or South Asian American experience. She was talking about her relationship with her mother, and our ancestors, relatives in India. And I think that came off as very authentic for a lot of people.”

During the Democratic National Convention in August 2020, Kamala Harris introduced herself to America in those very terms: “There’s another woman, whose name isn’t known, whose story isn’t shared. Another woman whose shoulders I stand on. And that’s my mother-Shyamala Gopalan Harris.”

In parallel, though, the US is no stranger to name changes as a method of cultural assimilation.

The quest for American-sounding or white-sounding names has been a tradition in immigrant communities in the US from the time the first outsiders arrived on Ellis Island.

In fact, the first of Trump’s family in the US was a Drumpf – the outgoing US President’s grandfather Friedrich Drumpf came here as a 16-year-old.

Yet, the roll call of two dozen Indian names headlining wave upon wave of White House appointees and nominees seems to be pointing in a new direction – a return to roots in a foreign field.

Anyone who bet that mocking the name Kamala was a good idea in the year 2020 has gone broke.