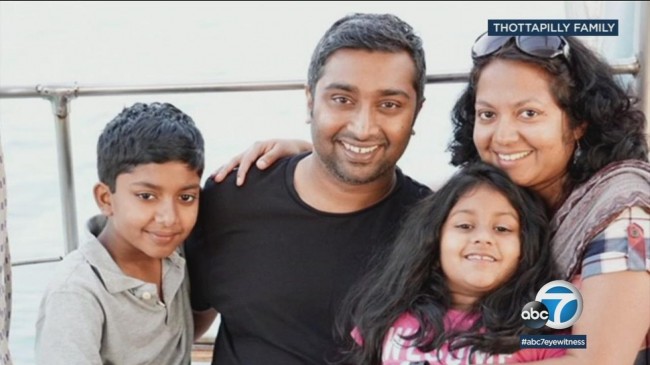 Atlanta, GA, April 16, 2018: Authorities recovered the bodies of two members of the Thottapilly family from inside their SUV on Sunday.

At approximately 11:30 AM a boating team noticed a gasoline smell emitting from the water approximately 1/2 mile north of the reported crash site (down stream). The searchers began to probe the water and located a vehicle submerged approximately 4-6 feet beneath the water, said a press release issued by the Mendocino Sheriff’s office.

Search divers entered the water and were able to feel what they believed to be a person inside of the vehicle. Visibility was extremely poor and divers noted the vehicle was encased in a large amount of sediment from the river current.

Recovery efforts continued for several hours and at approximately 6:30 PM the vehicle was partially removed from the Eel River by use of a tow truck. This provided searchers the ability to conduct a visual inspection of the inside of the vehicle.

Searchers subsequently recovered the bodies of Sandeep Thottapilly and Saachi Thottapilly from inside the vehicle.

On 04-15-20018 the Mendocino County Sheriff’s Office Coroner’s Division was also able to identify the adult female recovered from the Eel River on 04-13-2018 as being Soumya Thottapilly.

Autopsies are expected to be performed this week as part of the Coroner’s investigation into the incident.

Another search operation is being conducted today in and around the Eel River in an attempt to locate Siddhant Thottapilly who still remains missing.

The Thottapilly family vanished while driving from Oregon to San Jose.