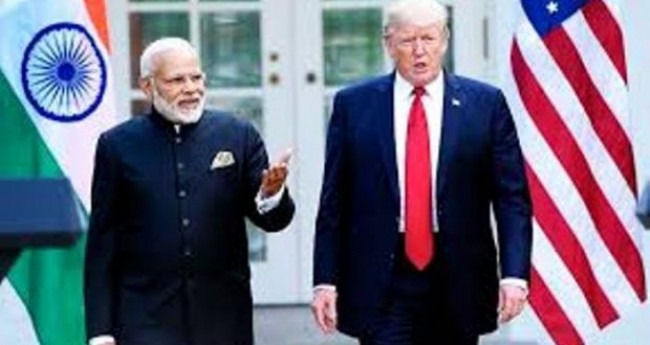 Someone identified as “Professor Qa @MuslimDiasporas,” tweeted that it was “racist impressions of Indian accent” and “Sagar Keer @sagark1985” tweeted: “I wonder what the bhakts will think about Trump imitating Modi’s accent.”

And dozens of tweeters posted the extract from the Washington Post or commented on it.

The Hill, an influential Internet publication specializing in politics, likened the alleged incident to Trump using a word for excrement to refer to African countries and Haiti as claimed by a Democratic Party leader, Senator Dick Durbin.

However, Hillary Clinton, the Democrat who ran against Trump, has publicly dishonored Mahatma Gandhi with her stereotype of Indian Americans, saying “He (Gandhi) ran a gas station down in St. Louis.”

Some gas stations in the US are run by Indian, leading to one of the derogatory stereotypes.

The alleged use of the Indian accent by Trump was buried in a report on Afghanistan in the Washington Post, which is owned by the Amazon billionaire, Jeff Bezos, the richest man in the world..

The story about the US considering adding 1,000 more troops in Afghanistan had a very brief mention of the incident attributed to unnamed sources as an example of Trump justifying Washington’s role in Afghanistan.

“Senior administration officials said that the President has been known to affect an Indian accent and imitate Indian Prime Minister Narendra Modi, who in an Oval Office meeting last year told him, ‘Never has a country given so much away for so little in return’ as the United States in Afghanistan,” the report said.

“To Trump, Modi’s statement was proof that the rest of the world viewed the United States as being duped and taken advantage of in Afghanistan, these officials said,” according to the newspaper.