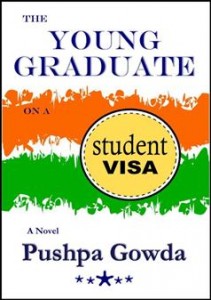 “I’m a student who has come to study in Morgan State University. I’m not able to find the person who was supposed to pick me from the airport. I’d like LAPD to take me to Morgan State, please” says protagonist Manasvi to airport security at Jackson, Mississippi. She just landed on the Promised Land with a student visa and cable TV shows as her source of information. She believes LAPD will come to her rescue; just like the TV show LAPD. Pushpa Gowda’s debut novel, The Young Graduate on a Student Visa is literally Manasvi’s journey from Bengaluru, India to Jackson, Mississippi and her trials and triumphs as a student in the US.  The Young Graduate opens with Manasvi being asked to provide 3 years of W-2s by her supervisor at work. Manasvi defends herself saying she is waiting for a response from her staffing company, only to realize that unless the documents are produced by the end of the day, she would be in violation of company policy, which is grounds for termination. Back home, as she looks for the documents, Mansavi finds herself traveling down the memory lane, right from her childhood days when seeds of the American dream are planted in her young mind.

Very early on, Manasvi is enchanted by the extravagance of her new friend Riya’s mansion as she watches Wonder Years, wondering why none of the boys from her school were like Paul or Kevin from the show. As a teenager she graduates to Discovery Channel, The Bold and the Beautiful grabbing a glimpse of another world. Later she meets her friend Anu’s older sister Dhanu who is completing her Masters Degree in the US. Manasvi’s meeting with her results in an ambitious dream to pursue her education the US too, with some sacrifices along the way. After what seems to be mission impossible, Manasvi finally manages to get financial help and an admission into Morgan State. Her childhood friend Vikram has already left for the states. She is now all on her own, and has to learn everything from scratch including the fact that LAPD will not always rescue everyone in the US. Gowda manages to portray Manasvi’s journey effectively as she faces trials and triumphs getting an internship, learning about credit cards, dealing with the local Indian population and other nationals and ultimately just learning to deal with people of all diversities and situations.  There are various aspects Gowda touches upon, including friendships, dating and changing behaviors of her “friends” as she progresses ahead of them.  She adds in a road trip, some parties and finally graduation to the mix to spruce up the narrative, and it works.

Pushpa Gowda’s strength is her ability to capture the protagonists’ thinking process to justify her final decisions. For example, when Manasvi starts out at the university, she has no perception of color- black, brown or white. But then some people and situations force her to think about it and then she concludes that while most people (mostly Indian) warned her to stay away from African Americans, they were in fact the people that helped her the most during times of need.  Her realization that there was no need to distinguish people based on color is well narrated.  I also enjoyed the gradual changing phases of her relationship with a classmate Kavya and her husband. It seems realistic. Yes, The Young Graduate feels pretty close to home in its chronicle. Being from Bengaluru myself, I particularly enjoyed the usage of local colloquial language (Kannada) in the narrative. All of her chapters make for a good read, but it did not feel like a story. It is more of a journal in its format and so I missed a conclusion. Especially since we had Manasvi looking for her papers the beginning, I wished the story was weaved around it. I understand the author is coming with a sequel where Manasvi transitions from being a student to a high-skilled employee. She perhaps wants to continue her story there, but when I finished this edition, I felt the need for a conclusion for the story I started with. For that reason it feels more like the journal of Manasvi from being a carefree engineer to a graduate from the US. It is still an enjoyable read, particularly for those that have been through the grind, certainly has the “been there”, ‘done that” feel. Those from Bengaluru will feel the nostalgia; miss the innocence and simplicity that was so much part of the Karnataka culture earlier.  You will find more information about the author at www.pushpagowda.com.

The Young Graduate is heartfelt and sincere at the core, with nice realistic touches that make for a good reading. I only wish the story was carried through.