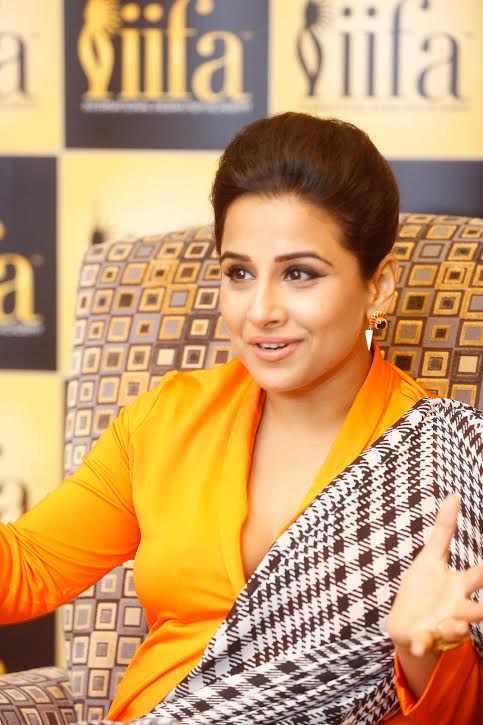 “Having traveled to a number of exotic locales the world over, IIFA has made its mark on the map, educating the world about Indian cinema,” Balan said. “Going forward, I am very pleased to be a part of IIFA’s landmark journey, as they venture into the United States, in Tampa Bay. I am excited to be a part of the IIFA Master Class this year and look forward to engaging with my fans in the US.” 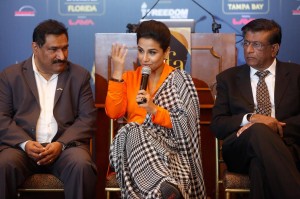 Balan also made mention of the increasing influence of Indian cinema across the world. As an example, she presented an anecdote: at the immigration line coming into America, she explained to the officer checking her ID that she’s here for the awards; the officer replies that though she does not know the specific names, she has seen a few Bollywood movies. When Balan asked how she could understand the differences in language and even vocabulary, the officer replied that Indian cinema is all about feeling; and that they end well and happily.

Balan also spoke about the master class (hosted by IIFA for only 200 people) with Hollywood star Kevin Spacey. The IIFA master class is effectively a workshop and dialogue between the two actors about similarities and differences in the two industries. The workshop then dives into the nitty-gritty of film-making: when does a song fit into a war movie? How is a Bollywood song composed? Then the workshop will open up to the audience.

A short Q & A followed. Balan answered eloquently, using different languages to communicate with representatives of different presses (e.g., she replied in Bengali to a reporter from a Bengali-language newspaper). Some difficult questions were also presented: for example, one reporter asked why South Indian movies were not at IIFA. An IIFA executive who took the question, said although IIFA is not currently honoring the arts of the south; they are hoping and working to change this for the future.

The press conference took place on the second floor of the Ritz-Carlton hotel near Battery Park on the southern tip of Manhattan. Several IIFA executives also spoke at the press meet.

Having played a large hand to bring the IIFA ceremony to Tampa Bay; cardiologist, philanthropist, Dr. Kiran Patel said, “As the excitement builds up, we are pleased to have Ms. Balan join us in the US. With the descend of Bollywood in Tampa Bay and the continued goodwill of the Indian community behind us we look forward to the grandest celebration of Indian cinema that the US will bear witness to.”

Sabbas Joseph, Director – Wizcraft International and IIFA said, “This is a momentous occasion indeed for IIFA and we are thrilled to be debuting in the United States. We have had an overwhelming response from the fans here and want them to experience the true magic of our cinema. IIFA has therefore decided to open up the Magic of the Movies to audiences. We trust that the partnership we have struck with Tampa Bay will lead to great benefits to both countries in terms of entertainment, trade and tourism.”

The IIFA, ultimately, has a goal to import Indian entertainment to America. The IIFA awards engender an economic boom in whatever city it takes place: business deals, tourism and attention are showered upon the hosting city. The total economic impact, according to the IIFA executives, amounts to several millions of dollars. Twenty-thousand tickets have already been bought for the upcoming awards.

A movie explaining the splendor of IIFA was shown; and then another video of the achievements of Vidya Balan.

IIFA Weekend and Awards will take place in Tampa Bay, Florida from April 23- 26.

The Videocon D2H IIFA Weekend is presented by Videocon D2H and the Tata Motors IIFA Awards is presented by Tata Motors. The IIFA Weekend & Awards will be broadcast globally on Star Plus, for the 10th year running. Visit Tampa Bay is the Official Destination Partner for the IIFA Weekend and Awards 2014 and Visit Florida, a key partner. Freedom Health Insurance are co-presenting sponsors for the IIFA Celebrations, Tampa Electric Company (TECO), a sponsor of the unique community event of IIFA Stomp and Mosaic, a sponsor of FICCI – IIFA Global Business Forum.

The exclusive IIFA VIP Corporate Hospitality Packages presents a privileged few, a once-in-a-lifetime opportunity to be a part of the dazzling action packed weekend. With 3 types of packages – platinum, gold and silver available, a range of exclusivities including  access to various events, star-studded after parties, green carpets and meet and greet opportunities with favorite stars await those who purchase them. For more info, contact – vipcorporatehospitality@iifa.com

US court drops indictment against Khobragade