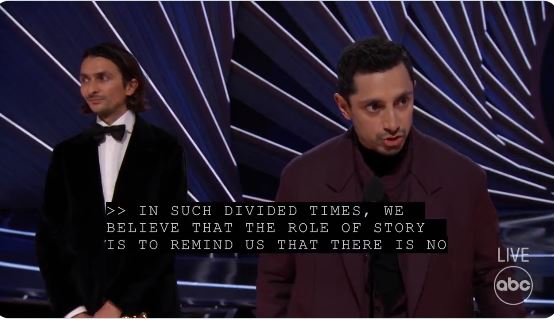 Joseph Patel won the Academy Award for the documentary, Summer of Soul. “First Patel to ever win an Oscar,” he posted on social media after his win.

The Long Goodbye is based on Ahmed’s music album of the same, which was released last year. In 2021, Ahmed was nominated for his role as a hearing-impaired drummer in Sound of Metal.

In his acceptance speech, Ahmed said, “In such divided times, we believe that the role of a story is to remind us there is no ‘us’ and ‘them’. There’s just ‘us’. This is for everyone who feels like they don’t belong. Anyone who feels like they’re stuck in no man’s land. You’re not alone. We’ll meet you there. That’s where the future is. Peace.”

Aneil Karia‘s debut feature film SURGE premiered in competition at Sundance Film Festival 2020, where its lead Ben Whishaw won the World Cinema Special Jury Award for Best Acting. It had its European premiere at the Berlinale and was released theatrically in Summer 2021. The film was produced by Rooks Nest for BBC Films and BFI. He is currently in development on his next feature film, due to shoot in late 2022.

In television, Aneil is about to start work as director on THE GOLD, a new heist drama series for BBC One and Paramount+. He previously directed the closing three episodes of TOP BOY for Netflix.

Karia has also made the music video for Teardrops by Kano which won Best Music Video at the Shots Awards 2021. In 2017, Aneil directed the short film Work, financed by Film4, which was BAFTA and BIFA nominated for Best Short Film. This followed his first short film BEAT which screened at festivals worldwide.

Patel is a producer, director, writer, and executive with over two decades of experience in TV, film, digital and print journalism. He was most recently the Head of Content at Vevo, the world’s largest music video platform, and has held similar positions at Vice Media, The Fader, and MTV News & Docs.

While with Vice, Patel was showrunner for the TV series The Vice Guide to Everything, producer of the “Vice on HBO” weekly news series pilot, and helped launch the Noisey and Creators Project platforms. At MTV, Patel created and directed the Hip-Hop documentary show My Block and oversaw the network’s Choose or Lose coverage around the 2008 Presidential Election.

Indian-American Raj Subramaniam takes over as FedX President and CEO